The 50th patient was treated at Great Ormond Street Hospital for Children last month with a pioneering treatment to transplant otherwise-discarded thymus tissue into very young children who lack a working thymus.

The thymus gland produces T-cells, which are white blood cells with a vital role in fighting infections. Infants born without a thymus are said to have athymia, most commonly due to a rare disorder called complete DiGeorge syndrome (cDGS). As a result, they lack T-cells and are likely to die within the first two years of life unless the problem can be corrected.

The technique, originally developed in the United States, uses healthy thymus tissue which is necessary to remove to gain access to the heart during surgery for congenital heart disease in infants. The removed tissue would otherwise be discarded but with parental consent can be donated for transplantation. The removal has little effect on the thymus donor as their immune system has already developed and not all the gland is usually removed. The tissue is then grown in the laboratory before implantation into the thigh muscles of the patient with athymia.

It has previously been reported that around 75 percent of patients with cDGS had a successful outcome after receiving a thymus transplant. They developed T-cells and the ability to fight common infections, come off preventative measures such as antibiotics and immunoglobulin injections and were able to attend nursery and school.

How has COVID-19 affected the programme?

Following the lockdown in March 2020, the transplantation programme was suspended as some of the team were needed for COVID-related clinical duties. However, as the number of children on the waiting list built up, to lessen the risk of severe complications, the programme was granted special permission from NHS England to resume accepting patients.

Despite the pandemic, the team at GOSH made great progress in 2020, treating 10 patients which was double the average number performed in each of the previous three years.

The £1million programme funded by Great Ormond Street Hospital Children’s Charity (GOSH Charity) is supporting the researchers and clinicians at the hospital to further develop this treatment, which GOSH offers on the NHS.

Great Ormond Street Hospital is one of only two centres in the world to perform such transplants, the other being Duke University in the USA. Patients travel to GOSH from all over Europe and further with one case last year travelling from as far as New Zealand. Restoring the immune system does take several months and the children remain highly susceptible to infection and need to be carefully managed by their home medical teams during this time.

GOSH carried out its first thymus transplant in 2009, and in March 2021, four-month-old Florentina from Gätringen, Germany, became the 50th patient to receive the life-saving procedure at the hospital. While it is too early to measure the long-term success of the transplant, doctors are pleased with Florentina’s progress so far.

Florentina’s mum, Stefanie, said: “The procedure went very well. I think it will take a while to see the positive impact of the transplant - we were told that it will take around eight to nine months for the T cells to develop. In the meantime, we have to be careful with her and make sure she doesn’t get any infections.

“Until we arrived at GOSH, she hadn’t seen me without a mask. This is the first time she’s seeing anyone, including myself without one. I love how I can now properly converse with her.

“When we arrive back in Germany, we’ll have to stay in hospital for a while longer so they can monitor her. They have told us that we might be able to go home during the summer, and we are really looking forward to seeing the family again. My hope is that she can go to a normal primary school and do the same things as every other child can do, free of illness.”

“Until we arrived at GOSH, she hadn’t seen me without a mask. This is the first time she’s seeing anyone, including myself without one. I love how I can now properly converse with her. 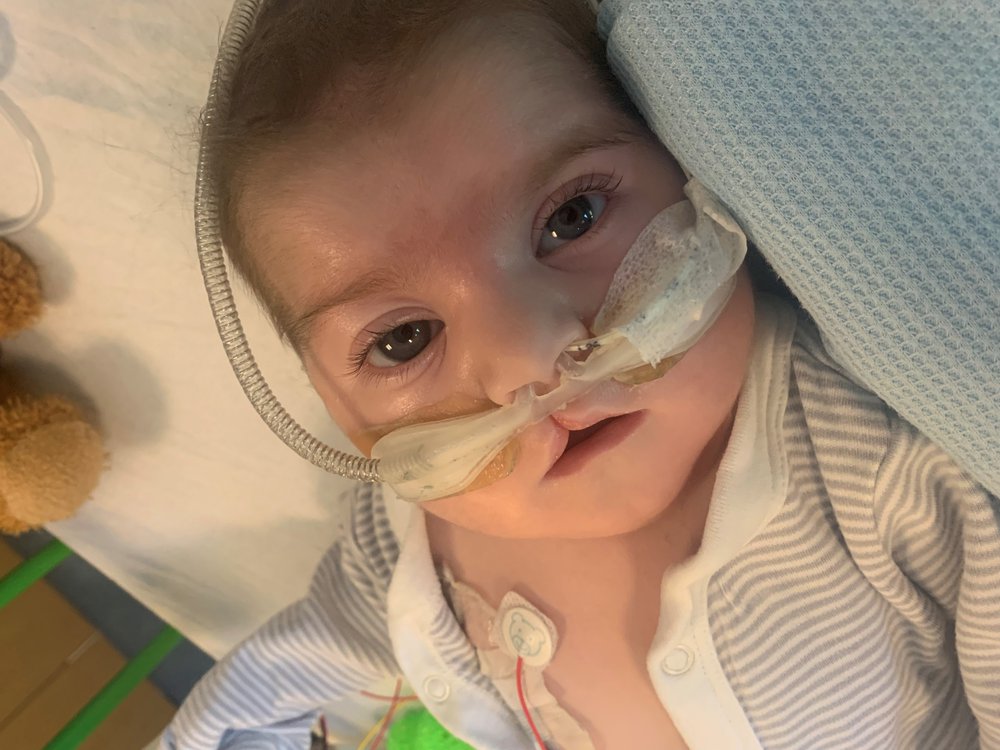 Oscar, from Ammanford in Wales, received his thymus transplant at GOSH in September 2019.

Oscar’s health complications began as soon as he was born in May 2019. Early diagnoses revealed that he had CHARGE syndrome. This is a rare genetic disorder that affects many areas in the body, including the eyes, heart and ear.

The severity of Oscar’s conditions became more apparent when further blood tests revealed that he had an absence of T -cells, which play a central role in the adaptive immune response.

When Oscar was three months old, he was transferred to GOSH for a thymus transplant. The transplant was a success, and despite a few health scares in between – including a cardiac arrest - Oscar is now home for the first time in his life.

Oscar’s mum, Bryony, said: “I can’t fault the thymus transplant team – they were amazing. I never felt that I didn’t know what was going on. They were there for me as well as Oscar.

“Oscar is very complex – he’s deaf and blind in one eye. He’s not crawling or walking yet either, but we hope he will pick that up. I’m also not sure whether speech will be possible in the future, but I always say ‘never say never’ with Oscar.”

A centre of excellence in thymus transplant

“We’re thrilled to have reached this important milestone and have given so many children the chance to live a relatively normal life. We’re proud of the work we have done to build up our hospital as a centre of excellence in thymus transplantation.”

Dr Kiki Syrad, Director of Grants and Impact at GOSH Charity said: “It is fantastic that 50 children have now benefited from this pioneering technique with many more to be helped in the future. At GOSH Charity we are so proud that our generous donors, including Letter One, have supported GOSH’s world-leading thymus transplantation team to reach this milestone.

“The brilliant team of clinicians and researchers are using charity funding to discover new ways to increase further the number of immune cells produced after the transplant, and to reduce the chances of complications. This is exactly the kind of life-changing impact that funding for paediatric research can offer to seriously ill children and their families, and is why funding research remains so important.” 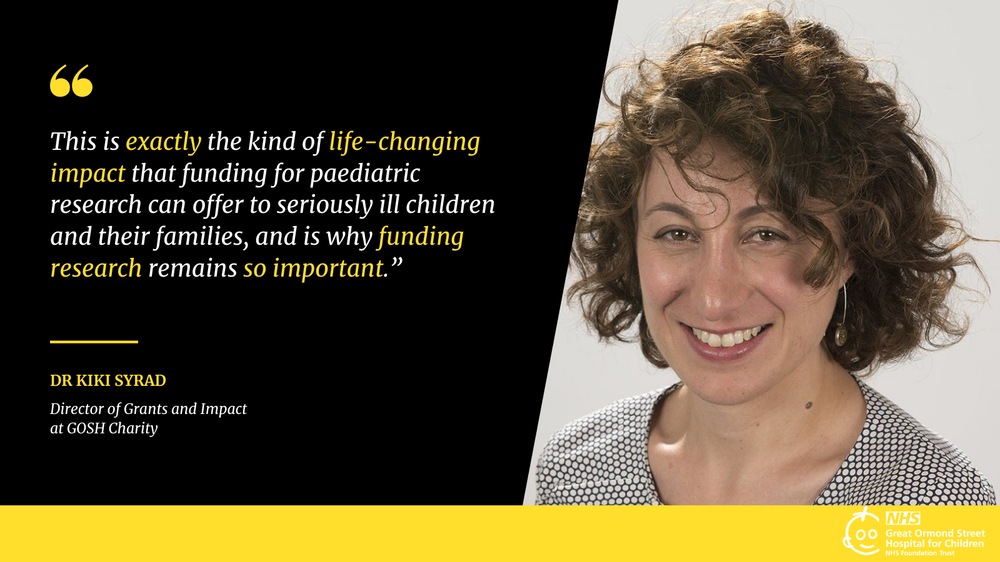 Some patients do develop complications after transplantation as a result of the new T-cells being poorly regulated which can cause some damage to the body’s own tissues. These problems are usually treatable, but the research team, based at the Zayed Centre for Research into Rare Disease in Children at GOSH are working to optimise the process and reduce the chance of such complications.

This work has been made possible thanks to a grant from LetterOne to support the Letter One/GOSH Charity Research Group in Thymus Transplantation which also receives funding from the Jeffrey Modell Foundation, the Wellcome Trust (to Prof Adrian Thrasher, Principal Research Fellow) and the National Institute of Health Research through the Biomedical Research Centre at GOSH.

Host a Play Date this July and raise money to help fund our amazing Play team. Learn about GOSH Charity's upcoming event below.

Last year, Hannah, one of our intensive care nurses, supported a family through an incredibly difficult time in their lives, when their daughter Margot sadly passed away 24 hours after she was born...

The Power of Play

Great Ormond Street Hospital’s expert Play team knows play can help children cope with whatever life throws at them. They've teamed up with GOSH Charity to share expert play tips and resources with parents across the UK.