The first child to be treated in the UK with gene therapy celebrates his 21st birthday this week, twenty years after having the pioneering treatment at Great Ormond Street Hospital for Children (GOSH).

Dubbed ‘bubble boy’ by many, Rhys Evans from Cardiff was born with a rare disease, Severe Combined Immunodeficiency (SCID), that left him vulnerable to even the most minor infection. Rhys was just a year old when his parents made the brave decision for him to be the first child in the UK to receive the therapy. He's now a healthy young adult heading off to university.

Since that historic moment at GOSH, over 100 children have been treated with gene therapy for dozens of different diseases. Many of these children would have been expected to die before their second birthday and gene therapy has been transformational in allowing many of them to live normal lives and go to school.

Gene therapy was pioneered at GOSH by Professor Bobby Gaspar and Professor Adrian Thrasher who were working on a revolutionary new type of therapy where a working copy of the gene could be inserted into the patients’ own cells using a modified, harmless virus. Much of this early research took place at the Wolfson Centre for Gene Therapy, supported by the Wolfson Foundation.

Back in 2001, the only treatment for patients like Rhys was a bone marrow transplant, an incredibly difficult procedure. Rhys became the first to receive this ground-breaking gene therapy and after a few weeks his immune system started to develop.

The majority of patients treated in clinical trials at GOSH with gene therapy have had different forms of SCID, but more recently patients with a range of diseases from leukaemia to rare genetic conditions such as Spinal Muscular Atrophy and an inherited retinal disorder which causes children to lose their sight - Lever’s Congenital Amaurosis – have been treated in clinical trials. GOSH is now a global centre of excellence for gene therapy and has treated more patients with the technology than anyone else in Europe.

Among those leading the clinical trials are Professor Claire Booth – who recently celebrated the successful results of a stem cell gene therapy clinical trial for ADA-SCID - and Professor Manju Kurian, who discovered the brain disorder dopamine transporter deficiency syndrome (DTDS) in 2009 and has subsequently helped develop a potential gene therapy cure for the disease. Both Professor Claire Booth and Professor Manju Kurian’s work is supported by GOSH Charity. 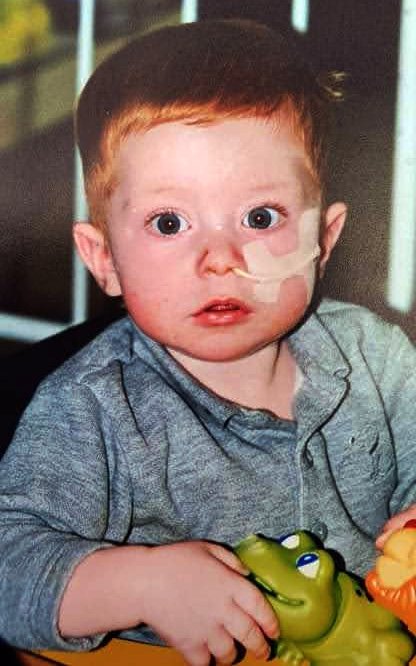 Rhys pictured as a toddler

“This is a true celebration of research changing lives and we are incredibly proud of what our research teams and clinicians have been able to achieve over the last two decades. It takes huge teams to bring treatments out of the earliest stages of development in the lab and into patients and we can only hope that this continues and we’re able to do more and more with this technology to help more patients.”

Jinhua Xu-Bayford is a Gene Therapy and Immunology Clinical Nurse Specialist lead at GOSH and has been involved in the gene therapy programme from the very beginning: “I used to work on the immunology and Bone marrow transplant wards and looked after children with SCID for whom conventional treatment was not always a viable option. . When we started being able to offer gene therapy for patients as alternative, it was so wonderful to be able to tell parents that there was another chance for their child that could transform their life.

“I have more or less personally infused every single gene therapy patient in a trial here and have seen the technology evolve into something that has a hugely positive impact on so many lives. Clinical trials are a massive piece of teamwork, and it is a tremendous effort to bring in patients – many from across Europe – to receive life-saving treatment. We know we simply have to do all we can to help and I am very proud to be a part of this.”

Much of the pioneering gene therapy research at GOSH takes place in the purpose-built Zayed Centre for Research into Rare Disease in Children. The Centre brings together state-of-the-art research and clinical care under one roof and is a partnership between GOSH, GOSH Charity and University College London. The Centre was made possible by a £60m gift from Her Highness Sheikha Fatima bint Mubarak, wife of the late Sheikh Zayed bin Sultan Al Nahyan, Founder of the United Arab Emirates, continued support from the Wolfson Foundation and funding from Great Ormond Street Hospital Children’s Charity.

People power being used to analyse eye research at GOSH

Months of work will be completed in a few days as members of the public help to examine high-resolution images of the potentially blinding eye condition, uveitis, as part of a project working across GOSH, UCL GOS ICH and Moorfields Eye Hospital.

A commonly used means of delivering additional oxygen to children in intensive care is not as effective as many clinicians assume, new research involving GOSH teams has found.