To capture a snapshot of our life-changing research, we asked our researchers to send us images that showed ‘A Moment of Research’. Shortlisted images ranged from beautiful microscopy to intricate representations of data and photography.

11 shortlisted images were put before three panels – the Young People's Advisory Group for research (YPAG), NIHR GOSH BRC partners and the NIHR GOSH BRC Junior Faculty. Each panel chose a favourite, and of these, Leukocyte Kaleidoscope was voted as a winner at the NIHR GOSH BRC 2022 virtual showcase.

This image competition is a great way to capture the breadth of research being conducted across GOSH and our partners. Our vison is to be a Research Hospital where all staff and patients are involved in research. We are incredibly proud of our researchers and their world-class work which has the potential to change the lives of seriously ill children and young people. 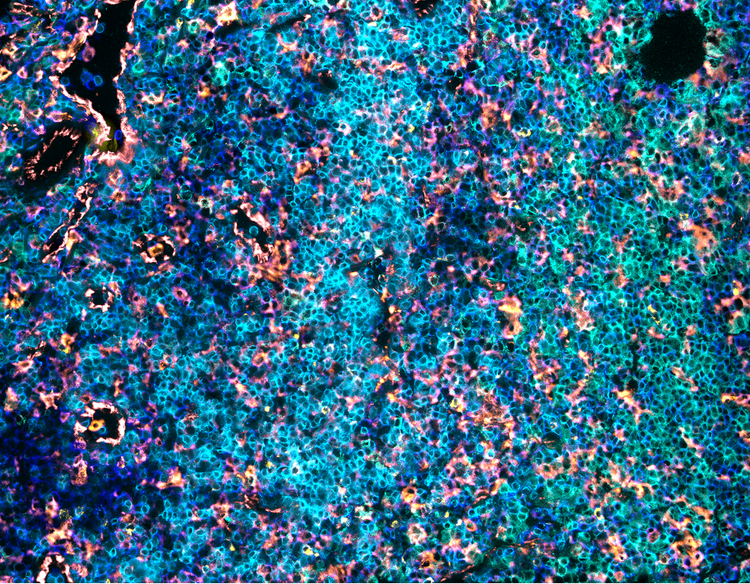 Entered by  PhD student Christina Burke, 'Leukocyte Kaleidoscope' was voted the YPAG favourite and overall winner. This sea of blues and pinks captures the different immune cells, or leukocytes, flowing through the tonsil tissue at any one moment.

Each leukocyte has a specific role to play within the tissue. For example, the cells coloured in light blue that form what looks like a river running through the centre of the image are T-cells. These are part of the adaptive immune system and help fight infection. Upon closer inspection, some T-cells are circled in a yellow ring, indicating a T-cell that is at risk of being over-stimulated and becoming ‘exhausted’.

Immune cells, particularly T-cells, play a vital role in fighting cancer. Christina's team hopes that using this imaging technique, known as chip cytometry, they will be able to better understand how T-cells interact with other cells within a tumour.

I am so grateful to this competition for allowing me to share our tumour immunity research with a wider audience – most importantly, with patients and their families, whom this work will benefit the most. 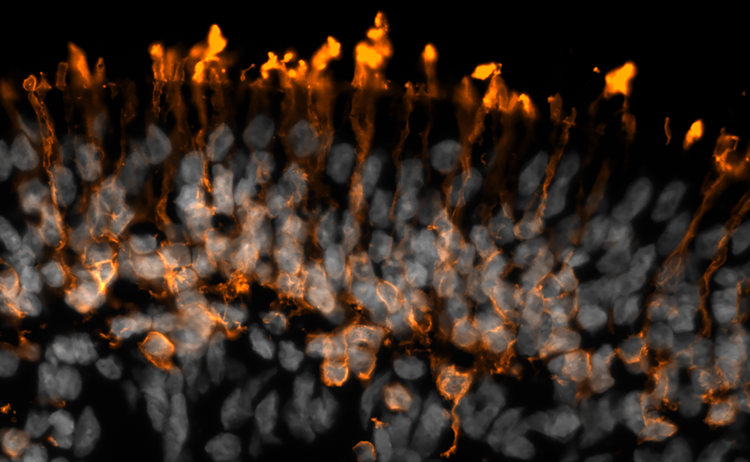 Submitted by Dr Hassan Rashidi, Senior Research Fellow in Stem Cell Regenerative Medicine at UCL GOS ICH, ‘Flames of Hope’ was voted the NIHR GOSH BRC Junior Faculty favourite. It shows photoreceptors, which when stained generated an orange flame, grown in the lab from stem cells. Photoreceptors are the cells in the retina, a thin layer of tissue in the back of our eye, that help us to detect light and ultimately see.

Retinal degenerative disorders are the leading cause of blindness worldwide with debilitating life-long consequences for those affected. It is hoped that one day we may be able to transfer cells like these, grown in a lab, into patients to help restore their sight. 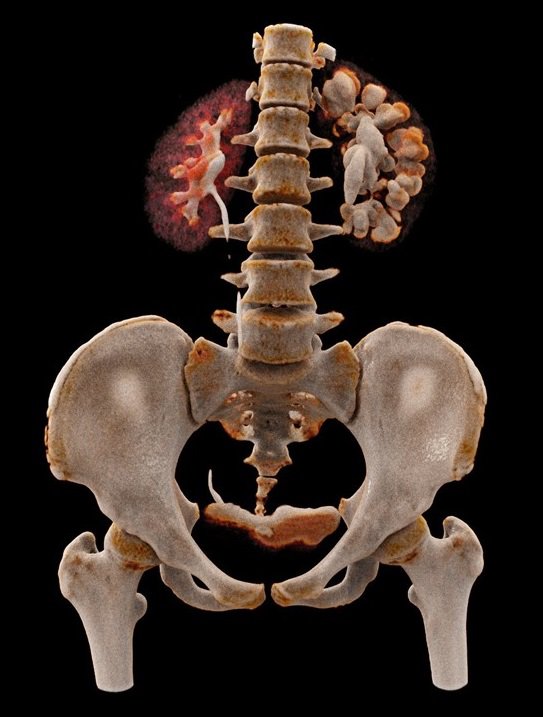 'Staghorn Calculus' was entered by Dr Susan Shelmerdine, Consultant Paediatric Radiologist at GOSH. This image shows a three-dimensional reconstruction of the kidneys, with the right kidney having a large kidney stone, known as a 'staghorn calculus' – this is particularly striking when compared to the healthy kidney on the left.

Kidney stones affect 1 in 10 people and may be caused by chronic infections or metabolic diseases. They are caused by the build-up of crystals in the kidney which forms a hard stone-like lump. The build-up of this over time can result in the gradual damage to kidney tissues.

Susan and her team use these reconstruction images to explain their findings in a more understandable way to their patients.

Scroll through the full shortlist below

It has been 10 years since we were invited to take part in the London 2012 Summer Olympic games opening ceremony. Nine patients and three members of staff waved to the world as our logo and name lit up the Olympic stadium.