In 1914, Great Ormond Street Hospital (GOSH) had been in existence for 62 years. In this article we explore the history of GOSH, the local community and members of staff who fought bravely.When war broke out, many of the younger clinical staff were called up and some of the senior physicians, or those who had recently retired, were given management posts in military hospitals. The hospital employed female clinical staff for the first time in 1915.

The number of admissions during this period rose (due to wartime food shortages and breakdown of family life) with fathers on active service and mothers carrying out war work. Conditions treated included rickets, malnutrition and gastroenteritis.

From 1915 onwards, there was an increasing risk of air attacks from Zeppelin airships, and later bomber aircraft. A wooden anti-aircraft screen was built on the hospital roof but blew down in a gale soon after. It was felt to be more trouble than it was worth to replace.

The hospital had a number of ‘near misses’ with bombs landing nearby or in its garden. Maggie Turner, a nurse at GOSH, wrote to her mother describing a Zeppelin raid.

Nearly every window in Great Ormond Street is smashed to bits and there was a huge fire in one of the houses. We could see the Zeppelins dropping bombs…The sky was one blaze from the fire at the back of the hospital. All the nurses really behaved in a splendid way, only a few lost their heads and nearly fainted.”

‘Refugees’ from the bombing from the local populace were also sheltered at the Hospital during air-raids. The sheet of statistics compiled indicates that nearly 900 people were sheltered on the worst nights, presumably in the basement of the 1875 building which had formerly housed the Outpatient Department.

Remembering our GOSH members of staff and their families. 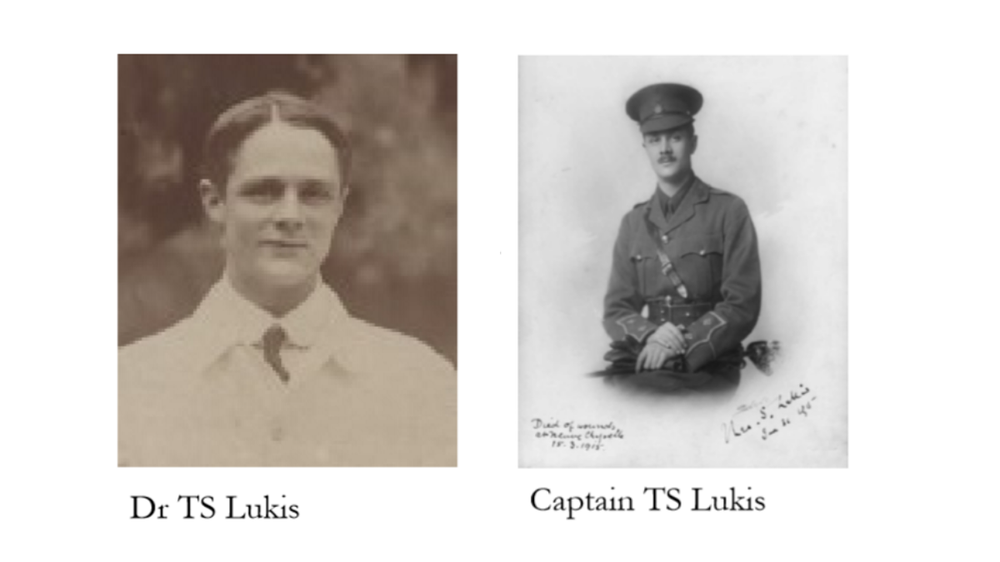 Theodore Stewart Lukis was born on 7 December 1885 in Cawnpore, India, where his father Sir Charles Pardey Lukis held a senior position within the Indian Medical Service. Following school in England, he registered as a medical student at St Bartholomew’s Hospital, graduating in 1910, and awarded the Gold Medal in 1912. During his short medical career, he held positions at Queen Elizabeth Hospital, Hackney, Great Ormond Street Hospital as well as St Bartholomew’s Hospital.

Theodore was one of the earliest men involved in the Scouting movement, started by Lord Baden-Powell in 1907 with a camp for boys held on Brownsea Island. Theodore was the founder of the 1st Toynbee Hall Scouting troop in 1908 with the objective of ‘showing that scout work could be fully carried out in the heart of London’. It was when he was with his scouts camping in Chelmsford that he enlisted in the ranks of the London Regiment in 1914. He was rapidly promoted to Lieutenant in December 1914 and then Captain on 15 March 1915 (the day he died). Such was his leadership, 80 of his Scouts followed to enlist shortly after him.

Theodore was wounded by a shell exploding in his trench at Port Arthur, near Neuve Chapelle on 12 March 1915, from where he was carried by two of his scouts to the Base Hospital at Boulogne. In a letter to his aunt, dictated to a nurse on 14 March, he wrote:

I had a very narrow squeak of serious trouble—the German artillery started bombarding our guns which were not far behind our own trenches ... Then the expected happened: a particularly loud shriek and I found myself hurled into the corner of the dug out … my left face was torn and with great difficulty I kept the earth and blood out of my mouth with my left hand … Meanwhile I am laid up at Boulogne with a fractured thigh as my chief disability and daresay it will not be long before I get a chance of seeing you!”

Sadly, he died from his wounds, the day after this letter was written.

In a letter to Theodore’s mother dated 20 March 1915, the Regimental Chaplain wrote:

Perhaps as you say, in mercy God allowed him to die as he would have been blind, hardly in his right mind long together had he lived. He was, as far as I can remember, struck in the head by the eyes, I do not think he suffered very severely, it is wonderful how many do not suffer a great deal. The pain seems to be deadened. I had no idea how horrible war is until I got out here. May God in his mercy, soon bring it to a close.”

Theodore’s entry in the first volume of De Ruvigny's Roll of Honour, 1914-1919 records:

His great ability was recognised by all, and he was profoundly interested in medical research. But his deepest interest was in the condition of the London poor, and he early gave practical relief by throwing himself heart and soul into the Boy Scout movement.”

Bernard was born on 28 November 1882 in Beaconsfield, Tasmania to Presbyterian Minister Edward Charles Tennent and Amy Margaret Huxtable. Bernard was one of seven children, with three older brothers, an older sister and two younger brothers. His mother died a week after the birth of the youngest, Stuart, in 1888.

Bernard left Australasia on the ship “Ionic” from the Port of Wellington and following stops in Rio de Janeiro and Tenerife, landed in London in 1905, ready to start his medical training at Edinburgh University. He was employed at GOSH as House Physician/Assistant Casualty Officer from October 1912 to April 1913.

Bernard was awarded the Military Cross ‘For conspicuous gallantry and devotion to duty in continually exposing himself with the utmost fearlessness under heavy shell fire in order to visit his posts in the front trenches. He dressed many men in the open, regardless of personal danger, and when the bearers became casualties, he took their places and assisted to carry the wounded himself’ He died of wounds received on 22 August 1917 and is remembered in the Bellacourt Military Cemetery, Riviere. 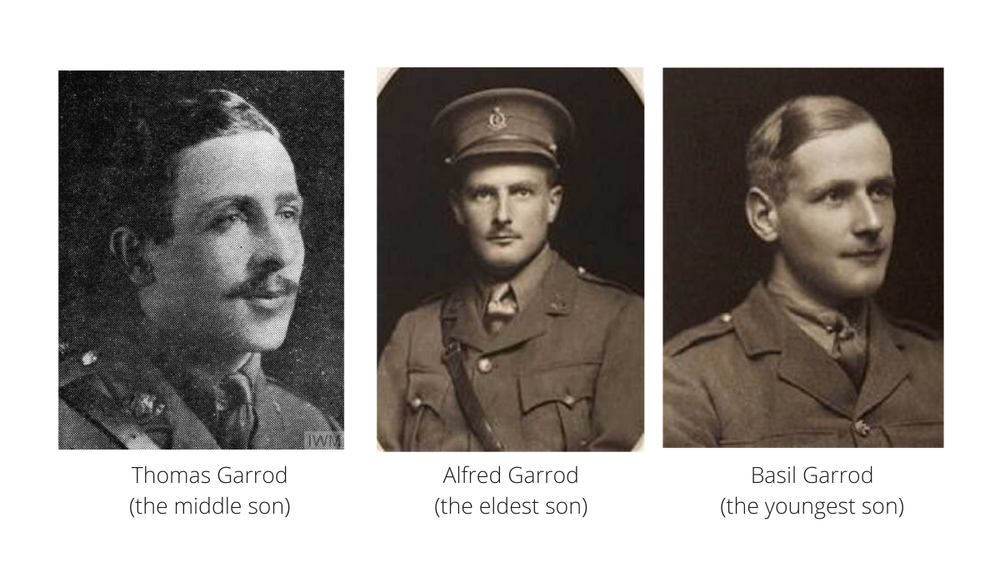 Sir Archibald and Lady Garrod had one daughter and three sons: Alfred, Thomas and Basil. They were all brought up at 9 Chandos Street, Marylebone. In 1892, Sir Archibald was appointed Assistant Physician at GOSH, where he developed expertise in inborn metabolic disorders and urinalysis. By 1906, his eldest son Alfred was following a similar path to his father, studying medicine at Cambridge University.

Sir Archibald served as medical consultant to the Army, mainly in Malta. His three sons joined the armed forces and served in various theatres of war: Thomas (the middle son) served in France and Flanders in 1914 and was promoted to the rank of Lieutenant in April 1915. He died aged 20 years in May 1915 from wounds.

Basil (the youngest son) attended the Royal Military College at Sandhurst and joined the Loyal North Lancashire Regiment with the rank of Second Lieutenant in December 1915. He was promoted to Lieutenant in July 1917 and then attached to the Royal Air Force as an Observer from November 1917. He served in France with the 149th Night Flying Squadron from May 1918. He died in active service on 4 February 1919 aged 21 from pneumonia.

He was an F. R. S. and a pioneer of bio-chemistry in England... His life was greatly saddened by the loss of three sons in the war. He became Regius Professor at Oxford and Director of Research at St. Bart’s, but no man can endure the calamities demanded of him and keep quite the same vitality.”