Sign to Sing Day: The power of music and makaton

This sign to sing day, we caught up with music-lovers Annemarie and her three-year-old son, James, to learn all about the powers of communication through music and sign language.

"James has been learning Makaton since he was around eight months old," begins Annemarie. "It was so important for us as a family to learn and teach the Makaton sign language to James, as it was his only way of communicating his wants and needs to us.

"The idea of signing Makaton to songs was inspired from James's older sister Anna, who is six years old. She absolutely loves music and is always singing and dancing around. One day I was thinking about how James could join in with his sister, and so I began to learn Makaton to the songs that Anna loves.

"Today, James absolutely loves signing Makaton to songs. We make it fun, it's nothing serious, with me singing and James signing. It's a family thing we do now which is lovely. So far, we have recorded songs by George Ezra, Lewis Capaldi, Westlife and our rendition of 'We Wish you a Merry Christmas' was a great way to get festive this year." 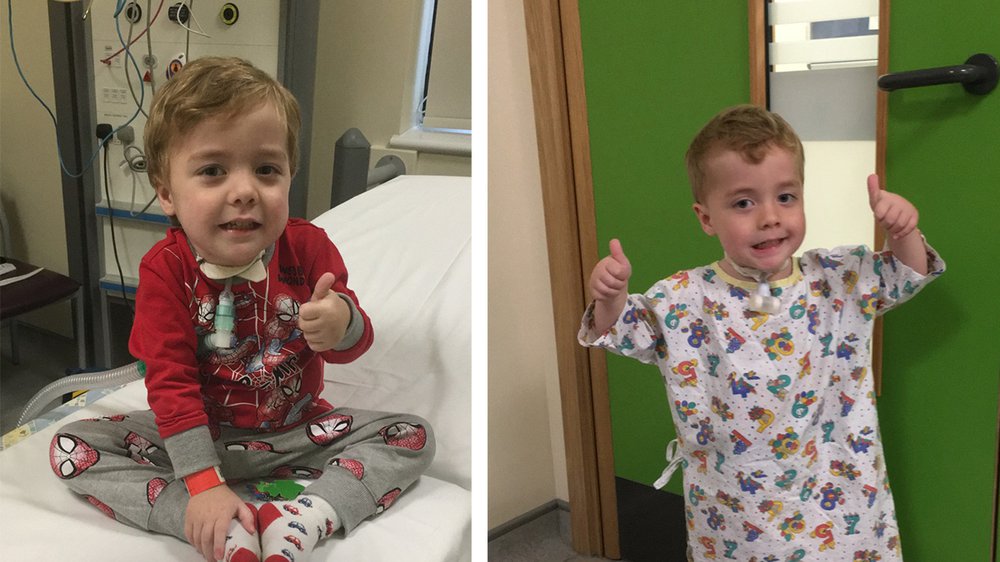 "James is a fun-loving three-year-old. He's always up to mischief and really is a beautiful boy inside and out. He has everyone wrapped around his wee finger, he is so caring and has coped amazingly with everything he has been through at Great Ormond Street Hospital (GOSH).

"James was very ill when born, at 37.5 weeks via a planned c-section, experiencing kidney failure. At 5 weeks old he went to theatre for surgery to relieve pressure off his kidneys, however when they anaesthetised him and tried to put the oxygen tubes in place, they couldn’t get them into his airways. With his airways only one millimetre wide, James had to have an emergency tracheostomy fitted.

"We were referred to GOSH in 2019 for reconstruction surgery on James's airways. Mr Hartley, our surgeon, was amazing. The surgery involved taking some rib cartilage and adding it on to his trachea to make his airways bigger. They also had to create two vocal chords, as James's were fused together. Once this happened, they put a stent in place to maintain and support the new airway to aid healing. Eight weeks later, the stent was taken out.

"Since then, James has been able to breathe a bit through his mouth and nose. This has meant he can blow bubbles and blow out candles on a cake! This is something James has never been able to do so far, so we are really looking forward to his next birthday.

"James has coped amazingly with everything he has been through so far. He truly is a very special boy and we are so blessed to be his parents.

"James had a review surgery with Mr Hartley a few weeks ago, and things seem to be going ok. We hope his vocal cords get strong enough for him to be able to talk, but it's amazing he can even whisper, and he uses Makaton to communicate, sing and play with us."

Ride for Their Lives: The Time to Act is Now

On Saturday 16 October, Great Ormond Street Hospital (GOSH), together with 10 other NHS Trusts in the paediatric sector, is celebrating the extra work being achieved to reduce waiting lists. We’ve called this event Super Saturday.

Ride for Their Lives: NHS cyclists join together on epic journey to save lives