Building is underway to transform the Grade II listed Italian Hospital building into the new Great Ormond Street Hospital (GOSH) Sight and Sound Centre, supported by Premier Inn. But what happens to a beautiful 100-year-old altar secluded within the old building’s chapel? We talk to Crispin Walking-Lea, Head of Healthcare Planning at GOSH.

“For nearly three years, as an entertaining diversion from my day job, I was supporting the relocation of this altar,” says Crispin.

“The altar’s history is interesting. For 120 years, it stood in the oratory chapel of the Italian Hospital in Bloomsbury. Although our earliest photograph of the altar dates to 1903, we believe that it was installed in 1898, when the building was erected.

"The hospital was founded for members of the London Italian community, and run by the Daughters of Charity of St Vincent de Paul at first, and the Sisters of Verona later on. The Sisters managed the hospital and provided the nursing care. The chapel and altar would have been used every day by the sisters for morning and evening prayer, meditation, and of course, it was used by patients and families whenever they wished.

"On the evidence of two stonemasons, we now believe that the altar was moved from a different chapel or church before arriving at the Italian Hospital in 1898. Perhaps it came from Italy. In any case, behind the altar, the fabric of the room is pretty much intact. It wasn’t designed for this space. This was also highlighted with a prayer card that was found attached to the underside of the shelf. There’s a splinter of wood on it, which could have been believed to be a part of the true cross. It would have been put there as a kind of devotion or blessing when it was installed." 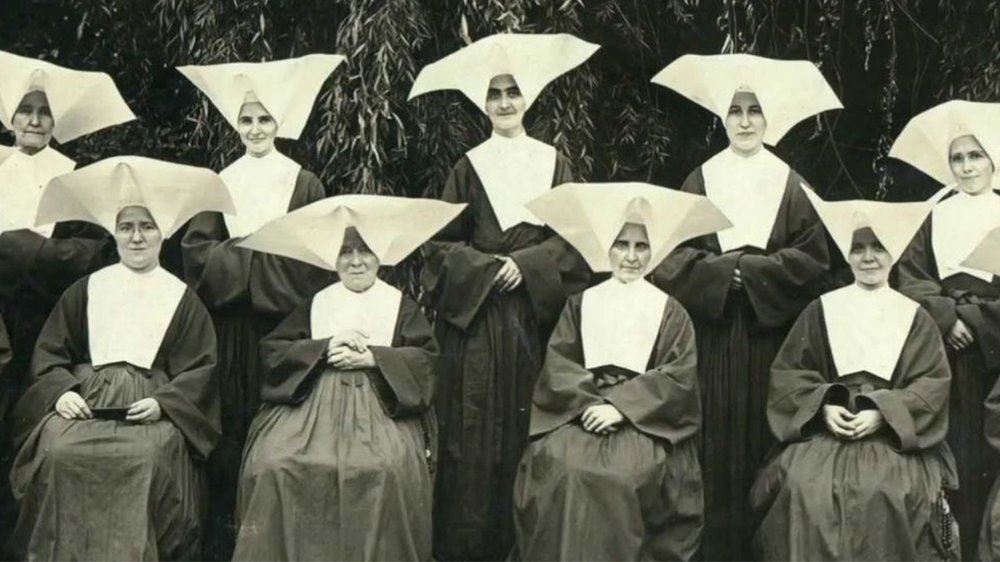 The Daughters of Charity of St Vincent de Paul, 1941

The decision to remove the Italian Hospital's chapel

"As we have a beautiful Victorian chapel complete with its own bespoke alter at GOSH, along with facilities for other faith groups, the Italian Hospital chapel was effectively redundant. Instead, as part of the new Sight and Sound Centre, it will become a very beautiful rest room for our hard-working staff, and a space for workshops with children.

"Once we'd decided what purpose the room was going to serve, we felt that relocating the altar was the best course of action, for both the hospital and the altar itself.

The primary reason to move it is so that it can continue to be used for its purpose.

"Instead, the new room will pay historical tribute to the old chapel. The intention is, where the altar used to be, the flooring will be filled in with parquet in a different colour, so that there will be a slight shadow of where the altar used to be. The room will be known as the old chapel. We will include in the chapel an information display to explain its history.

"The other elements of the chapel – stained glass windows and Latin inscription around the frieze, will all remain. Everyone will be able to see lasting evidence of the room’s rich history."

“This aligns with our overall approach to refurbishing the building. We want to preserve the history of the building where we can and wherever it is appropriate. That’s our responsibility as part of developing a grade II listed building, but also something we’re very passionate about. The exterior will be unchanged, and GOSH will be reintroducing signage on the frieze above the ground floor windows which, although displaying the new building naming and donor recognition, will be in the style of signage that was in that location in the early 20th century. We will also be restoring Goivanni Ortelli’s coat of arms above the entrance door on Queen Square.” 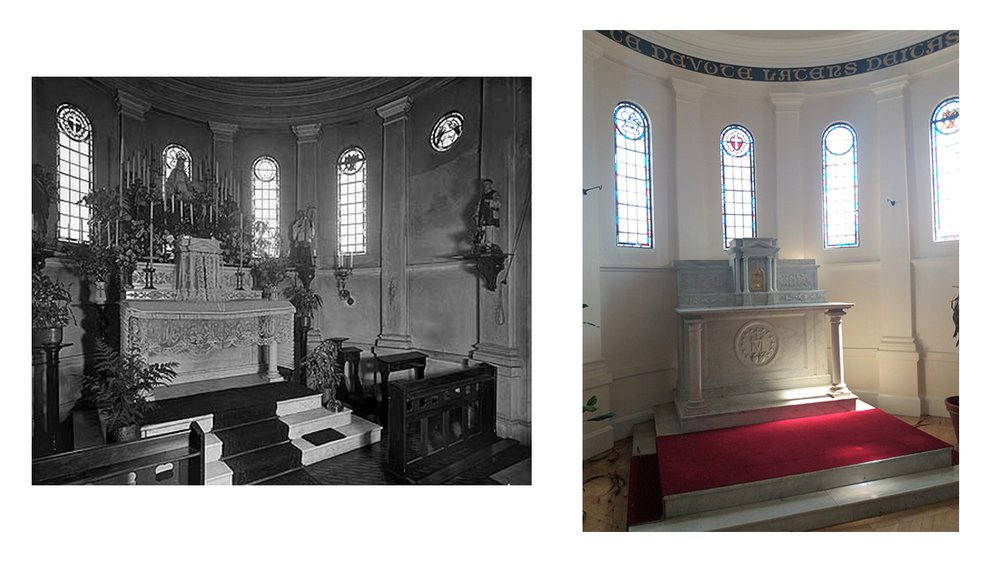 "The Roman Catholic Diocese of Westminster was very supportive of our project to relocate the altar. We received lots of responses to our advert in search for a new home, and we narrowed the potentials down to two options.

"I spoke with the GOSH Chaplaincy team, Jim and Anna Maria, and we decided that the church in Matlock was the most appropriate. The primary reason was that it would be used regularly and included in weekday masses.

"The final pieces of the puzzle were coming together. One: starting to see the chapel transformed into its new function. The other: seeing the altar in its new home. A closing ceremony in the hospital and an opening ceremony in Matlock marked the end and beginning of a new era for the altar."

We caught up with Sister Bernadette, Provincial Archivist at the Daughters of Charity of St Vincent de Paul, who attended the closing ceremony of the altar at the Italian Hospital.

“The ceremony to deconsecrate the altar was a joyous and beautiful occasion," says Sister Bernadette. "It took us back many years, and looking at the beautiful altar with the engraving of the back of the Miraculous Medal (medal of Our Lady) was truly moving. It was a little sad that the time had come to move the altar, but to know that it was going to another home was a bonus and a remarkable feat.

"I had previously worked for 16 years with young people who were blind or partially sighted and some who were deaf or hard of hearing, and to learn that the Italian Hospital was going to be used for children with visual and hearing impairments moved me greatly. It was as if I was meant to be there.” 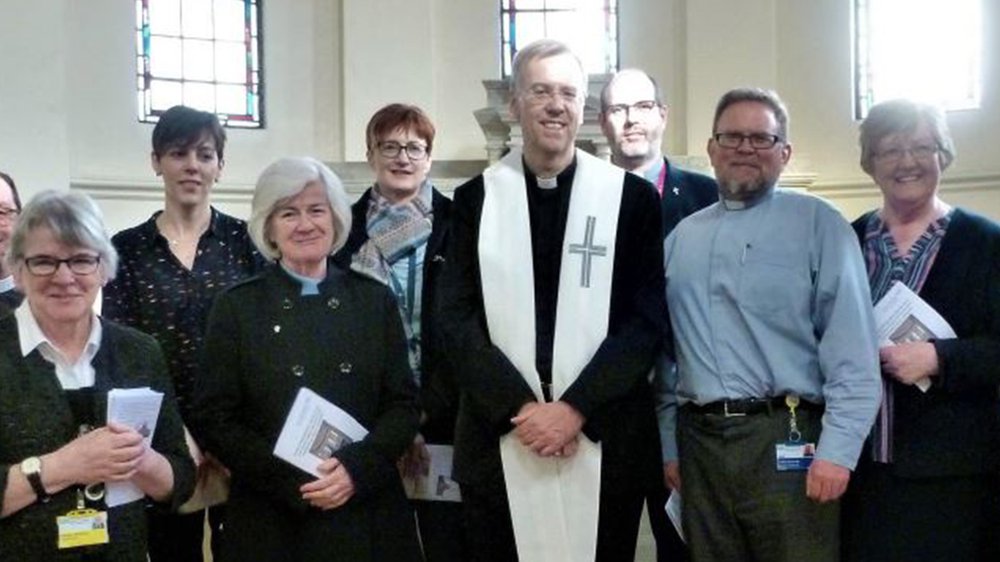 A divine touch: the opening ceremony

“The opening ceremony for the altar in Matlock was something of a culmination of events for me personally,” says Crispin. “In my spare time, I am a Catholic Deacon, but my secular job is unrelated to my ministry. Bringing the altar to Matlock was particularly special to me, as I attended that parish with my family as a young boy when we lived in Matlock for five years. You can imagine my surprise and delight when one of the enquiries I received about the altar was from Matlock’s Father Robbie, who, on behalf of his community, made the most compelling case to provide a new home for it. 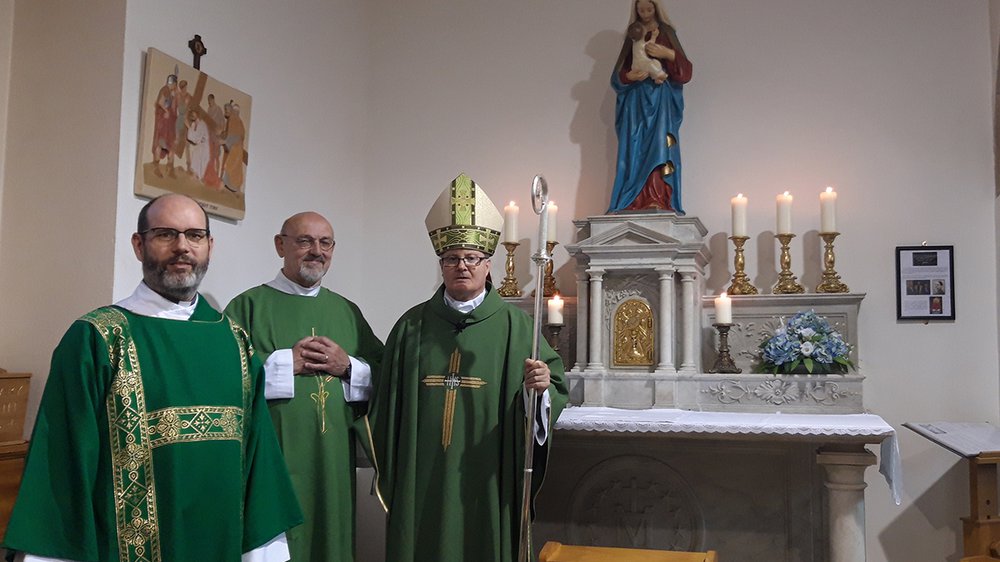 Currently, patients with conditions that affect their ability to see and hear represent the largest outpatient group at the hospital. The Sight and Sound Centre, located just a short walk from the main hospital site, will be specially designed with these patients in mind.

Find out more about why we need the new Sight and Sound Centre.