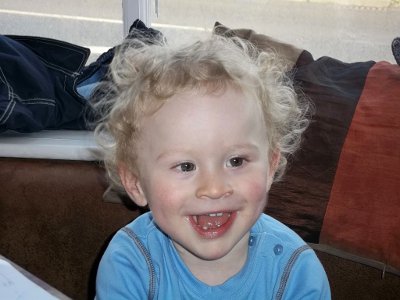 Shortly after being born, Noah was treated for a suspected lung infection. His condition deteriorated and eventually he was referred to the tracheal team here at Great Ormond Street Hospital (GOSH). Here, his mum, Becky, tells their story. "Having had a perfect pregnancy with no complications, on my due date I woke up feeling a few twinges, wondering if this could be the day our baby would make his or her arrival.

"At 4pm the contractions were strong and regular so my husband and I decided that it was time to go to Paulton Hospital.  On arrival, I discovered I was already 7cm dilated and that our baby would be making an appearance sooner than we all anticipated.

"However, by 10pm a decision was made by the midwife for me to be transferred to Royal United Hospital Bath as I was getting tired and struggling.  At 2.27am Noah Jeremy Matthew was born using a ventouse delivery. It turned out Noah had his arm across his head which was causing all the issues during labour.

"Andy (my husband) cut the cord and announced we had a baby boy. Noah was handed to me wrapped in a towel, crying, but then he stopped making any noise and went very limp and blue.  Suddenly the room was filled with doctors and my beautiful baby was taken away from me.  Noah was rushed out of the room and we were left wondering what was happening."

"At 5am we were informed it appeared he had a lung infection. They had placed him on a ventilator, given him paralysing drugs and were treating him with antibiotics. We were told hopefully in a few days we would take him home. Little did we know this was the start of a very long journey.

"Five days passed and the doctors were still none the wiser as to what infection they were treating and why Noah was struggling to absorb oxygen into his body. We were informed we were going to be transferred St Michael’s Hospital in Bristol where he would be given nitric gas to help open up his blood vessels and were placed in emergency accommodation on the ward so we could be close by.

"Noah was still not responding to this treatment and they decided to place him on a more aggressive type of ventilator which would keep his lungs open. This ventilator at the time was helping to save his life but also resulted in his tiny lungs being perforated and air escaping into the cavity of his body. By the time Noah was 10 days old he had six chest drains and was fighting to stay alive."

"At 4am on Day 10 we were told to say goodbye to our son as the doctors had run out of ideas. Then a consultant on duty that night informed us of ECMO treatment (extracorporeal membrane oxygenation) where the treatment would act as a bypass for his lungs, taking the blood out of his body, oxygenating it then placing it back into his body which would allow the lungs time to heal.  The hunt then began for a hospital to accept Noah for this treatment.

"After three hours we were told Glenfield Hospital in Leicester would accept Noah. They came and picked him up and rushed him with blue lights to the hospital.  We were told about the risks of this treatment and signed the consent form for them to carry out the operation immediately. We then began the journey by car up to Leicester, not knowing if our son would survive the trip.

"Upon arrival, Noah had two cannulas in the side of his neck and the ECMO treatment had begun. We were informed that the normal length of time on this treatment would be seven to 10 days, but there was always a high risk of a blood clots travelling back into his heart while on this treatment.  We were given emergency accommodation on the ward which was such a relief to know we would be close by.

"A week into the treatment, Noah suffered from a bleed into his bladder which resulted in him having to have kidney dialysis. His body then started to go into shock and acid started to form in his blood which we were told had a high risk of attacking his other organs.

"For the third time now we were told to say goodbye to our son. Our parents and my brother had to make a sad trip - they thought it would be the last time they would see their grandson. But remarkably, this little boy wasn’t going anywhere. By the time our parents arrived, Noah had turned the corner and was fighting back!"

"After 21 days and against the odds, Noah came off ECMO. The doctors could not believe what a remarkable recovery his lungs had made.  We even had our first ever cuddle with Noah. I say cuddle - he was delicately placed on a pillow with his ventilator and wires still attached and we were able to hold the pillow. But after five weeks of waiting for this moment it was the most amazing feeling ever.

"Suddenly we started to allow ourselves to love this little boy, even though we were constantly being told to not get too attached as we would not be taking him home.  The next day, Noah was put into a travel incubator and we were anxiously transferred to Bristol Children’s Hospital, where they conducted further tests to reveal what was going on with his airway.

"The assessment showed the opening to the right side of his lung was very small, and there was no cartilage surrounding the pipe, so air was able to get into his lung but not easily come back out, hence the build-up of carbon dioxide.  His airway also showed almost complete rings which were not normal, so his assessment findings were referred to GOSH and Professor Elliott agreed to carry out a further investigation of his airway.  This was great news!  At last we stood some chance of having a better understanding of his airway and what if anything could be done to help our little boy."

"Four weeks later, we travelled to GOSH for Noah to be assessed by Professor Elliott.   We were told by the team that until they opened Noah up they were unsure of what they might find.  Two days later we signed the consent form, told our little boy how much we loved him and prayed for him to be looked after, as we watched him go off to have his life-saving operation.

"The operation resulted in Noah’s airway to the right being cut away until they found cartilage and then re-attached to the windpipe.  The four hours Noah was in the operating theatre took forever. Neither one of us dare think about being able to take him home. But the operation was a success. The following day, Noah came off the ventilator and a week later, we all travelled back to Bristol Children’s Hospital.

"Nearly three months after Noah was born, we finally got to take our precious little boy home and begin our family life.

"We truly believe he is our little miracle - against all odds he fought his way to be with us.  I will always remember saying to mum 'where there is life, there is hope and hope is all we have'. Noah was not going to give up and neither could we!"