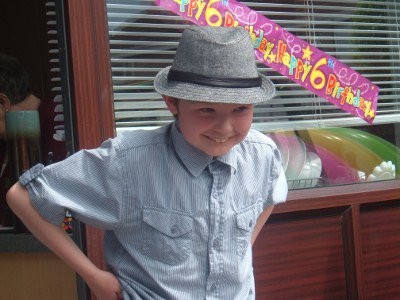 Liam, 10, tells his story about travelling from Stirling to London to receive treatment from the Tracheal team at Great Ormond Street Hospital (GOSH). "Hello my name is Liam and I'll be telling you about how GOSH saved me.

"Recently, at cubs we were asked to choose a charity that we could help out by running a fundraiser for. I put my hand up and said GOSH because they saved my life.

"Just after my first birthday, I became ill. I stopped eating and drinking and then I stopped breathing. All this happened over a few days. I was then taken to Stirling Royal Infirmary Hospital.

"I was put on a drip to put water back into me. I was fine for a few days but then I stopped breathing again. That night the doctor sent me back as she wasn’t happy that they didn’t find out what was wrong with me and she sent me back.

"That was a long journey. I stayed for a month. My dad visited me every day after work until my bedtime."

"A different doctor put a camera down my throat and found out that my trachea was only 3mm wide. That means that the pipe that you breathe through is very, very small. He wasn’t able to fix me but he did know a man that might. His name was Professor Martin Elliott and his hospital was far away on Great Ormond Street in London. That was an even longer journey.

"After a few weeks I nearly got sent home but I got ill again. Martin Elliott and his team helped me once again. I was at GOSH for six weeks and visited every three weeks after. Now, hopefully I only need to go every 18 months and I feel much better now.

"Thank you for reading and thanks to Professor Martin Elliot and everybody who has helped me at Great Ormond Street Hospital."