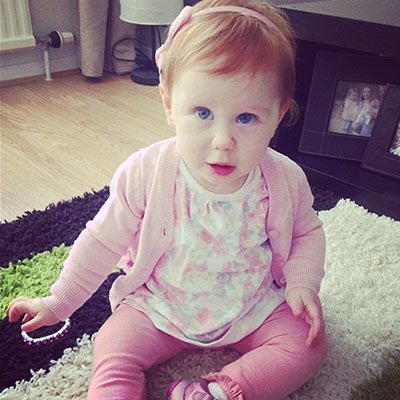 Emily was born not breathing, and doctors soon realised she had other problems. She underwent heart and bowel surgery at her local hospital before she was transferred to Great Ormond Street Hospital (GOSH) in May 2013, and diagnosed with long segment tracheal stenosis and left pulmonary artery (LPA) sling. Her mum, Karlyn, reflects on their experience.

"I suffered preeclampsia and was in hospital about 10 weeks before Emily was due. They did regular scans to make sure that my condition wasn’t affecting her, but nothing was ever picked up. Unfortunately, my preeclampsia got worse, so they delivered Emily four weeks early in an emergency section. When she was born, she wasn’t breathing, so they took her straight away to neonatal and discovered a few other problems. She was then transferred to Yorkhill Children’s Hospital in Glasgow, where we spent the next three months.

"At three days old, she had a stoma done because she didn’t have an opening for her bottom, and on day seven they did a repair of the left pulmonary artery. She had total anomalous pulmonary venous drainage (TAPVD), which basically means none of the blood was flowing into the lungs correctly. All this time she was on a ventilator because her breathing was very noisy and her chest was compressed, but they weren’t actually sure what was wrong.

"Eventually, after three months, she did start to manage to breathe on her own, but when we got home, every infection she got she took a step back. It came to the point where she needed to come to GOSH because she just couldn’t cope with the chest infections."

"We knew by word of mouth that the hospital was brilliant. When it’s your own child, you obviously have your worries and concerns, but everybody was lovely and the facilities were great.

"We stayed in the family accommodation first of all, just across the road at Weston House, and then after Emily had had her surgery we went down to the Sick Children’s Trust house. It was great because obviously it’s free, and we were so far away from home, and we didn’t know how long we were going to be there for, so it’s just amazing to have that facility right on your doorstep."

"We weren’t actually told specifically what she had until we got to GOSH, we were just told there was a malformation of the trachea but it didn’t have a name. When we arrived at GOSH, they did a bronchoscopy and bronchogram in the first few days and realised that it was a long segment tracheal stenosis. They knew exactly what was going on with her because they’d obviously seen it before, so it was definitely the best place to be.

"She also had a left pulmonary artery (LPA) sling - an artery going around her windpipe - which wasn’t causing her any problems initially, but as she grew and the windpipe didn’t grow, it needed sorting. Basically, I don’t think anything in Emily’s body was in the right place. All her tubes and arteries were all mixed up. Most of them worked but they just weren’t where they should have been." 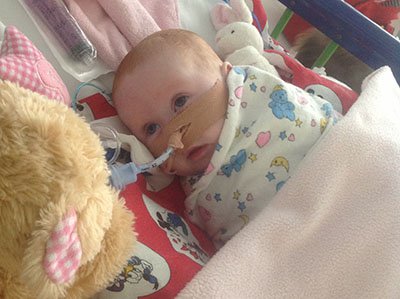 Emily the day after her surgery on CICU at GOSH

"We were kind of in a strange way happy to be told that it had a name and it wasn’t going into the unknown with her. When Emily was diagnosed with long segment tracheal stenosis, we didn’t really know what it was, so we spent a great deal of time reading up on it. Denise, the nurse that worked closely with us, was very helpful and she gave us websites to look at. She’s from Glasgow, so it was nice to talk to someone that was Scottish.

"It was great for Emily to be receiving such great treatment, because the condition is so rare that it’s the only place, effectively in the world, that does it. And Professor Elliott is the best at it. So to have your daughter in the hands of someone who’s so marvellous is just amazing."

"Being told exactly what they were going to do was a bit scary, but we were very pleased to meet Professor Elliott because we’d read up a lot about him and realised how well respected he was. She had a slide tracheoplasty to widen her airway and correct her LPA sling, and was away for about 10 and a half hours, which was horrendous. After surgery Professor Elliott came to talk to us and we were so pleased that we were able to thank him."

Recovery on CICU and Bear Ward

"After her surgery, she was in cardiac intensive care (CICU) for a week and a half because when she had the initial check-up to see how things had gone, they weren’t overly happy with it. That was really disappointing, but thankfully, when they looked a few days later, things had turned a corner and she was looking a bit better. Then we moved down to Bear Ward and she got better.

"All the nurses on Bear Ward were really nice and we spoke to some of the other mums and dads. We had a three year old with us as well because we didn’t know how long we were going to be away for and we didn’t want to leave her, and there was a nursery downstairs so the facilities for her were great, and there was always something going on." 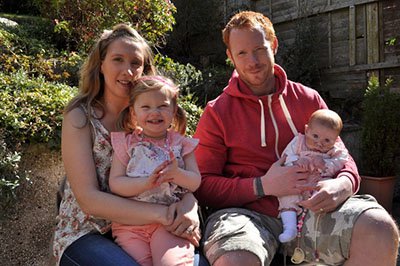 Emily with her family a week before leaving for GOSH

"Emily’s doing really well, she’s just finding her feet and learning to walk and just generally being a little kid. She doesn’t show any signs of being ill at all, just if she gets a cold, she gets quite a severe one. She’s actually only had one chest infection since she’s been back, which is quite rare because normally they would be fighting a chesty cough quite a lot.

"She does have other problems just with being born so early. She’s having physiotherapy at the moment for walking and she’s got a submucous cleft palate, so she doesn’t really do any talking, so we’re in speech and language therapy for that. She is just like a normal baby, she’s just not doing the right things at the moment but she’ll get there because she’s proved to be a little fighter."

"There are some hurdles to overcome, but we’re more than sure that she’ll jump over them and be fine. It’s been a difficult year but we just have to stick together and get through it and as long as Emily’s well, that’s the most important thing.

"She’ll have bronchoscopes I think every year for a good few years just to make sure that the airway is growing, but hopefully she’ll never need airway surgery or heart surgery again, they’re very happy with the way all of that’s gone, so that’s a blessing – a big one!"

"Just try not to be scared, although that’s probably quite difficult. I think the name Great Ormond Street makes you think "oh, that’s a good hospital". It’s difficult to say but try and read up about the condition if you can, and the hospital, because there’s a lot of information on the website about what’s there and all that sort of thing. I would say try not to be scared but give yourself some information."