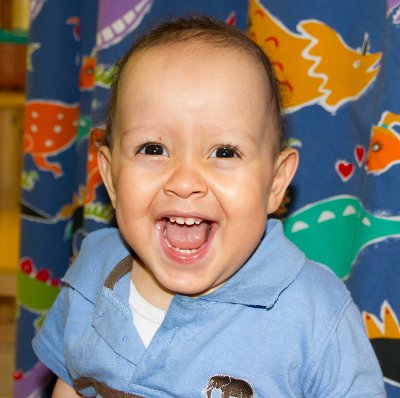 When Ronan was born three months prematurely, weighing just 2lb 6oz, he struggled to breathe unaided. Here, his dad, Kevin-Joseph, shares the long journey towards Ronan’s life-saving surgery and his ongoing care under the tracheal team at Great Ormond Street Hospital (GOSH). "In August 2011, my wife, Natasha, went into premature labour. We were on holiday with our first child Kayden (two years old) in Norwich and miles from our home in Birmingham. We were not prepared for our little boy to arrive or for anything that was to follow.

"After a night of labour pains and difficult meetings with premature baby specialists regarding stats on complications and death rates, the decision was made to have a Caesarean in the morning. Ronan was born three months early, weighing 2lb 6oz.

"From the time Ronan was born, he had difficulty breathing unaided. He was immediately put onto a ventilator but this was difficult as the breathing tubes were too large to pass down his airways. After a few days, Ronan was taken off the ventilator but instantly struggled to take any breaths and began to lose colour as his body was not getting any oxygen. The doctors had to re-intubate at the same time as giving Ronan CPR in order to make him stable.

"Again, it was difficult to pass a breathing tube but eventually they succeeded. It was at this time we realised that it would be a long time before we got Ronan home, if we were to get him home at all."

"After two weeks of living in Norwich Hospital, not knowing when we would get to a hospital in Birmingham or if Ronan would ever be strong enough to make the six-hour journey, we were transferred to Stoke. We were getting closer but we were still 50 miles away from home and Kayden.

"We were only in Stoke for a week but it felt like months. During this whole time Ronan had to be heavily sedated because if he moved, the tube that was in his airway would come out and his breathing would have to be assisted with CPR to keep him alive while a new tube was passed. As parents this was one of the hardest things we have had to do.

"We had to sit looking at our boy in an incubator, watching his monitors for any sign of improvement. We saw him struggle every day, his alarms going off constantly as he would stop breathing, doctors struggling to get him breathing with the ventilator. After a week, we were moved to Birmingham. We were home but Ronan was a very poorly boy and we were about to find out how poorly.

"On our first night at home, our first time away from Ronan, we had a phone call at 3am to say we needed to get to the hospital because Ronan was not breathing. The doctors could not get a ventilation tube in and he would not make it to the morning. We thought this was it, the moment we had dreaded since the night we went into labour.

"By the time we had reached Ronan a tube was in and the machines were breathing for him, but he was not good. We still had our boy but the doctors told us he was seriously struggling and his life was constantly in the balance."

"Ronan had to be transferred to Birmingham Children’s Hospital Intensive Care Unit (ICU) first thing in the morning where they had more specialised equipment for babies of Ronan’s size and prematurity.

"It was at Birmingham Children’s Hospital that we found out exactly how poorly Ronan was. He was born with a PDA (hole in the heart), a left pulmonary artery sling (left artery wrapped the wrong way around his throat) and tracheal stenosis (narrowing of the airway 1mm wide). All these issues combined with Ronan’s size of 1.5kg meant that his chances of surviving were very slim.

"As well as continually being at Ronan’s bedside we now had to attend meetings with his doctor/nurse team. It felt like we were constantly meeting with specialists for each of Ronan’s complications and being told that he was not going to make it and discussing “exit strategies” if we ran out of options. At best we were given a 20 per cent chance of living but this was a chance and we were never going to give up on Ronan.

"Everyone, doctors and nurses alike, were brilliant especially because we were in at all hours, day and night, frequently in tears because we were regularly being told he was about to die but no one could give us any real answers or reassurance to what the future would hold for Ronan. There was a slight light at the end of the tunnel though because Ronan could have an operation (slide tracheoplasty) but he needed to double his weight to be 3kg. The problem was, could he live that long to gain that much weight.

"As the weeks went by, Ronan was struggling to gain weight because he was throwing up his milk and was only really on total parenteral nutrition (TPN) as “food”. These issues kept on week after week until they came to a head on Ronan’s older brother’s birthday. We were about to give Kayden his birthday cake when we got a call from the hospital. Ronan was in serious trouble. The doctors could not get him ventilated, they had been doing CPR for over an hour and his life signs were dropping away. This was the worst moment we could have imagined: our new son dying on our first son’s birthday.

"We arrived at the hospital to a room full of doctors and nurses keeping Ronan alive but they didn’t know how long for. The doctors managed to get a tube into Ronan’s airway but they didn’t think he was safe enough to stay like this. The decision was made to go ahead with the surgery despite the risk of Ronan being too weak and small to survive the procedure, it was our only hope."

"The next morning Professor Martin Elliott came up from Great Ormond Street Hospital (GOSH) to perform the slide tracheoplasty. We said our goodbyes to Ronan and hoped for the best. After six hours of surgery, Ronan came out safe and with a new larger airway. He was still on a ventilator because the airway was floppy but he was in a much better place than the night before.

"At first Ronan’s recovery was going well, he was beginning to need less ventilation and the signs looked good but this was not to last. Ronan’s chest/neck wound had become infected, one of the possible side effects of such major surgery. He was weak and small and was struggling to fight this next problem.

"The doctors told us that it would be best for Ronan to be monitored by the team that had performed the slide tracheoplasty. This meant going to GOSH, our fifth hospital in four months."

"On arrival, we found out that despite the success of the slide tracheoplasty Ronan still had a narrowed airway and floppy bronchioles. He had to be ballooned to open up the airway but this was only a short-term fix because the airway continued to narrow. At the same time, Ronan still had difficulties tolerating his milk so he was still not gaining any substantial weight.

"This issue with Ronan’s digestive system was caused by a narrowing of the large bowel. It was decided that Ronan needed to have some of his large intestine removed in order to correct this problem. We were becoming pros at surgery and consent forms now and we just saw this as just another thing that Ronan and us would just have to go through to get home."

"The surgery was successful and Ronan began to tolerate his feed. A few months later, he weighed 3.53kg and beginning to get stronger but his airway was still a concern.

"Ronan had numerous balloon dilatations to increase his airway size but it was not improving or hardening up. We only had one solution left to try to get him off a ventilator, a metal stent. It was not the best solution but it was Ronan’s only solution.

"We agreed to the next surgery and Ronan had a metal stent implanted into his trachea. It was a success. Ronan came back from surgery on lower ventilations settings and a chance of coming off the ventilator at some point in the future.

"Ronan was transferred back to Birmingham Children’s Hospital ICU to recover and reduce his ventilation. He was no longer paralysed and sedated with drugs and his personality was being to develop. He was getting bigger, stronger and breathing more on his own. He was beginning to interact with us and his big brother. This is what we dreamed of when he was born."

From strength to strength

"We knew that he was doing well because he would pull his TPN and airway tubes out all the time and was tolerating not having any support. It was not long until he was on CPAP. Ronan tolerated this well and was soon taking breaks off all support. He loved having no tubes up his nose and would fight when the time came for the CPAP break to stop.

"Ronan was soon off the ICU and on a High Dependency Unit where he eventually had no ventilation or CPAP support. Even better, we were allowed to take him off the ward. We only went 20 metres up the corridor but it was one of the best trips we have ever taken with Ronan. It was the first “normal” thing we had done with him. We knew that we were getting closer to coming home with him. After a few more trips around the hospital and a couple of day trips home the time had come for Ronan to come home.

"Ten and a half months after Ronan was born he came home for good. He still has his up and down times and we need to be regularly checked at GOSH but he is home and that is more than we could have hoped for after all he has gone through."