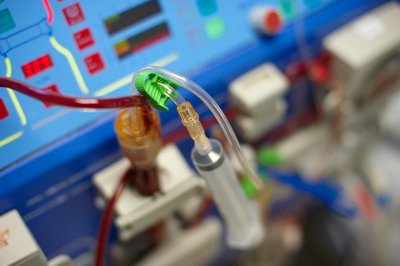 PLEASE NOTE in the light of the current coronavirus (COVID-19) situation, the Haemodialysis team has created a handy guidance FAQ document available below:

Coronavirus (COVID-19) – information for children, young people and families from the Haemodialysis team

Patients will now be able to undergo life-saving haemodialysis treatment whether they are at home or abroad.

Patients with renal failure are dependent on dialysis to provide essential life-saving treatment, replacing the work that is normally done by the kidneys. They are required to be in hospital three times a week for four hour sessions.

Patients on haemodialysis have strict fluid and dietary restrictions, and are dependent on a number of medications to maintain good health.

Dr Dal Hothi, Consultant Paediatric Nephrologist, said: “This is a potentially life changing service for renal patients and we are delighted to be able to offer it to our families.

“Dialysis treatment impacts on many aspects of a child’s life, including their health, education and social development. By offering this home based service, we are giving control back to families by giving them a choice and for the first time the option to travel abroad.

“Any patient weighing over 20 kilograms and meeting the relevant criteria will be eligible, and we hope those who do take up the option will see immediate benefits from an improved quality of life.”

Patients benefitting from the home haemodialysis programme will undergo more frequent and gentler therapy, and as a result are subject to less strict dietary and fluid restrictions. Their need for medication is reduced, and they should feel better with increased energy levels and appetite.

Families will be trained by a senior renal nurse and will have around the clock support from GOSH medical staff. Carers will be re-trained in using the equipment every six months, and where possible young adults will have the chance to train themselves in using the machines.

Adam Phillips, 16, was born with kidney failure and within two weeks was transferred to GOSH from his local hospital in Oxford. For the next two years he waited for a transplant.

Adam’s dad was found to be a suitable match and he had a kidney transplant at GOSH just after his second birthday.

For the next 13 years Adam lived a full and active life, coming to the hospital for a check up every three months and doing all of the same things as his friends, including playing cricket at county level.

Unfortunately, Adam had to return as an inpatient to GOSH in June 2009, when tests showed his kidneys were failing again and he would need a second transplant.

Adam had his first course of haemodialysis in hospital in July 2009, and for the next year he would come in three times a week for four hour sessions. He missed school twice a week and on Saturdays was unable to meet up with friends as he was undergoing treatment.

Through competing at the Transplant Games, Adam had made many friends who had undergone all different types of transplant, including those who were now in need of a second procedure. Friends from America had mentioned that they were receiving haemodialysis at home on a portable machine.

Knowing the hospital was keen on introducing a home haemodialysis service, Adam was vocal about wanting to try it out. He felt it would improve his quality of life and allow him to spend more time at home with his family and friends. In June, Adam was selected as the first patient to use the service while he waits for a suitable organ donor.

Adam says: “I was so happy to be given the option of home haemodialysis. I knew from talking to my friends that my quality of life would improve, and I’d be able to spend more time at home doing the things I want to do. It’s also really great to have the option to travel abroad, especially as I missed out on the World Transplant Games in 2009 because I was too sick to travel.

“I also knew it would mean an end to the very long days I spent travelling into hospital, receiving treatment, travelling home and then recovering. Even though home haemodialysis is more frequent than in hospital treatment, it is less intensive which means less after effects and recovery time.

“I can’t thank the staff at GOSH enough for everything they have done for me. My friends have also been brilliant and have never treated me any differently. I’m not downbeat about things because I really believe in thinking positively, there’s no point otherwise.”