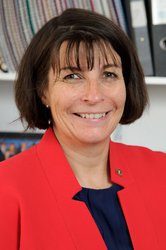 Helen's research has been targeted at improving outcomes in early onset epilepsy, specifically in assessing the role of surgery and ketogenic diet. Helen has also held key leadership roles both nationally and internationally.

Helen is Treasurer of the International League Against Epilepsy 2017-2021 (Secretary General 2013-2017), Clinical Advisor to the National Children’s Epilepsy Surgery Service, and Clinical Advisor to the update of the NICE guidelines for Childhood Epilepsy 2018-2021. She developed, as Coordinator, the European Reference Network for Rare and Complex Epilepsies (EpiCARE) launched in 2017.

Professor Cross qualified from Birmingham University in 1984, trained in paediatrics in Birmingham and subsequently in paediatric neurology in London, obtaining her PhD in 1998.

Professor Cross has published widely on seizure, neuropsychological and behavioural outcomes in children who have undergone surgical resection for treatment of their epilepsy.

Her research has focused on improving outcomes for children with early onset epilepsy. Her early research was into improving imaging techniques to determine areas of likely seizure onset in children with drug resistant focal epilepsy and has developed an epilepsy surgery programme based on her research.

She conducted the first randomized controlled trial of the ketogenic diet in the treatment of children with drug resistant focal epilepsy and is endeavouring to conduct the same in the very young and adults. Recognising there was little in the way of control data with regard to neurodevelopmental progress, she initiated the North London Epilepsy in Infancy study, where a cohort of children was recruited at diagnosis in the first two years of life, and has been followed to at least three years. She is now aiming to conduct a similar study over a wider geographical area, also examining phenotypes and genotypes.

She is also endeavouring to examine mechanisms of cognitive impairment – in particular examining the relationship of sleep to memory consolidation.