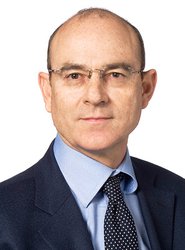 Professor Francesco Muntoni is a Paediatric Neurologist with an interest in clinical, pathological and molecular aspects of neuromuscular disorders.

The Centre offers specialised tertiary service for all neuromuscular disorders in paediatric age, and has been nationally commissioned since 2001 for the work on congenital muscular dystrophies and congenital myopathies.

The Centre works very closely with the adult neuromuscular service at the Institute of Neurology with dedicated combined transition clinics. The collaborative work with the University College London (UCL) Institute of Neurology is also underpinned by a Medical Research Council (MRC) Neuromuscular Translational Research Centre grant from the MRC, of which Prof Muntoni is the co-director.

Prof Francesco Muntoni is a paediatric neurologist with an interest in clinical and molecular aspects of neuromuscular disorders. He graduated in Italy in 1984 and completed his training in Child Neurology and Psychiatry in 1989.

Since obtaining his degree he worked on childhood neuromuscular disorders, initially in Italy and, since 1993, in London. Originally appointed at the Neuromuscular Centre of the Hammersmith Hospital, directed by Professor Victor Dubowitz, since 1996 he became Head of this unit, and from 1998, as a Professor of Paediatric Neurology at Imperial College London.

In 2007 he moved with the entire clinical, pathology and research teams of the Dubowitz Neuromuscular centre to UCL Institute of Child Health and Great Ormond Street Hospital for Children, in London.

He currently also is the Program Director for the Developmental Neuroscience research programme at ICH, Theme lead for Novel Therapies in The ICH/GOSH Biomedical Research centre and deputy Director for the MRC Neuromuscular Translational Research Centre at UCL.

Professor Muntoni has authored more than 400 peer reviewed manuscripts and raised grants from the MRC, Wellcome Trust, The European Commission and various national and international charities.