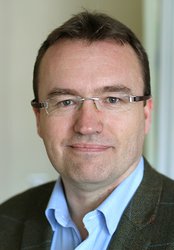 Professor Darren Hargrave joined Great Ormond Street Hospital (GOSH) in 2011 having previously worked at The Royal Marsden Hospital in London. He was appointed in 2017 as the GOSH Children’s Charity Clinical Professor in Paediatric Neuro-oncology.

Prof Hargrave specialises in paediatric neuro-oncology (tumours of the brain and spine) and the development of new anti-cancer drugs for children and adolescents. He trained in the UK and Canada (Hospital for Sick Children, Toronto). He is an international leader in his field and the current Chair of the European SIOP-E Children’s Brain Tumour Group and a member of several national and international clinical and research committees.

He is a Chief Investigator of several completed, on-going and planned clinical trials in paediatric cancer, ranging from “first-in-child” to international randomised studies. He has an interest in tumours that effect children with Neurofibromatosis and is a member of the Guy’s Complex NF1 Clinic. He Chairs the UK National Molecular Tumour Board for relapsed childhood cancers.

Early in my oncology career I was inspired to work with children with brain tumours and to develop better treatments and improve outcomes by understanding the biology of the tumours.

His research interests include: the biology of childhood brain tumours, the use of innovative imaging techniques in childhood cancer and drug development of targeted therapies in childhood and adolescent oncology. He has published over 60 papers in peer reviewed journals and book chapters.