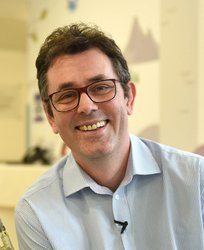 Professor Andrew Taylor is an expert in cardiovascular imaging, and has established the Centre for Cardiovascular MR at Great Ormond Street Hospital (GOSH).

He is currently Divisional Co-Chair and Divisional Director for the West Division. He has worked at GOSH since 2003.

He is a Fellow of the Royal College of Radiologist (FRCR) and Physicians (FRCP). He is a member of the British Society of Cardiovascular Imaging executive committee and is the academic member of the London Deanery Specialist Training Committee for Paediatric Cardiology. He held the Royal College of Radiologists’ Roentgen Professorship in 2006 and was recently honoured by the British Institute of Radiology with the Mackenzie Davidson Memorial Medal (2011).