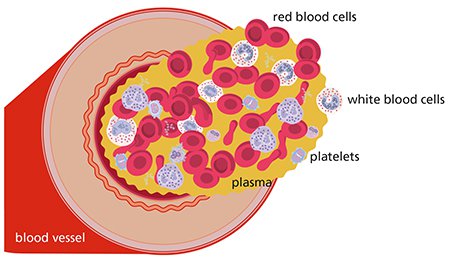 Looking closely at a sample of blood in the laboratory can tell doctors a lot about our general health. Many visits to hospital involve taking blood samples – we have lots of staff who are trained and experienced in taking blood – as well as nurses and health care assistants, we also have a team of phlebotomists.   This page from Great Ormond Street Hospital (GOSH) describes the sort of things that blood tests can show and how they are checked in our laboratory.Blood is made up of blood cells suspended in a fluid called plasma. We have three main types of blood cell. Each type of blood cell has a specific job to do in the body:

All types of blood cell are formed in the bone marrow. They start off as ‘stem cells’ that can turn into whichever type of blood cell is needed. This happens through another complex process called haematopoiesis.

How are blood samples taken?

We always offer children and young people local anaesthetic cream or cold spray before we take a blood sample. This makes their skin numb so they don’t feel the blood test so much. Read our Easy Read information Having a blood test with your child to know what will happen.

Why are blood tests needed?

There are thousands of different blood tests available – some more specialised than others. The most commonly ordered ones at GOSH include:

These are just the most common types of blood test carried out at GOSH. If the doctor has ordered any other blood tests for your child, ask them which ones and what they show. You can also visit https://labtestsonline.org.uk/tests-index for an overview of blood tests.

What happens to the blood samples when they’ve been taken?

Once the phlebotomist has taken enough test tubes of blood, they will put a label on each one with your child’s details so we can track it throughout the laboratory and can make sure the results are added to your child’s medical record.

They will usually put the test tubes in a plastic bag and then either use our pneumatic tube system or call a porter to take them to our laboratories.

The laboratory staff register the samples when they arrive and then use them to carry out the tests required. This usually involves using complicated and expensive machinery that can analyse samples more quickly and accurately than a human.

When do we get the results?

Many of the tests can be done quickly but others take a little longer. This is the main reason why we take blood samples at pre-admission assessment for instance, so we can be sure that the test results are back in time for when your child goes to the operating theatre.

Test results are reported back to your doctor and added to your child’s patient record ready for discussion at their next clinic appointment. Some test results are available for you to see using MyGOSH once you have signed up – details are at https://www.gosh.nhs.uk/your-hospital-visit/mygosh. If the doctor needs to speak to you before then, they will contact you.

What is a ‘normal’ result?

What happens to the samples when all the tests are done?

How can I learn more about blood tests and how they’re analysed?

At GOSH, we work with an organisation called Harvey’s Gang who run tours of our laboratories for children and young people. Ask at the Pals Office for details, ring them on 020 7829 7862 or email pals@gosh.nhs.uk

Compiled by:
The Labboratory department in collaboration with the Child and Family Information Group
Last review date:
September 2020
Ref:
2020F2321