This page explains about treatment of intussusception using an air enema and what to expect when your child comes to Great Ormond Street Hospital (GOSH) to have this procedure.

Intussusception is a condition that can occur in young children, where one part of the bowel ‘telescopes’ in on itself. This causes the bowel walls to press on one another, blocking the bowel. This can lead to reduced blood flow to that part of the bowel. It is a bit like a getting a sock turned inside itself.

What caused the intussusception and how common is it? 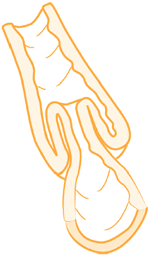 Bowel telescoping in on itself

We are not sure what causes the bowel to telescope in on itself, but there may be some link to infections. Your child may have had a cough, cold or high temperature and tummy ache in the days leading up to the intussusception, followed by vomiting or even passing blood in the faeces (poo).

We think that most of the time swelling in the bowel wall makes it telescope in on itself. Less often, there may be a physical reason, such as a pocket in the bowel that might get caught and tangled.

Intussusception is the most common cause of bowel blockage in infants and young children. It tends to happen between the ages of three months and 18 months.

How is intussusception treated?

What does air enema treatment involve?

The radiologist (doctor specialising in radiology) inserts a small, soft tube a short way into your child’s bottom, through which air is passed under pressure. The air pressure will start off at a low pressure and increase gradually if necessary.

Will the treatment hurt?

It may be uncomfortable for your child and they may become quite distressed, but this usually stops when the procedure has finished. We do not give sedation as it can increase the likelihood of complications. There may be small marks left on your child’s buttocks at the end of the procedure from where we squeezed or taped them together to keep the tube in the correct place and to stop any air leaks.

Are there any risks with this procedure?

In about one in every 100 children, the pressurised air may cause or reveal a tiny hole or ‘perforation’ of the bowel. Air could escape through this hole into the abdomen, which could rapidly expand. If this were to happen, a small needle would be inserted quickly into your child’s tummy to help the air escape. Your child would then need an operation to repair the hole in the bowel to prevent further problems.

Even if the air enema works, there is a small chance that the intussusception could come back, with the bowel re-telescoping in on itself and re-blocking. In our experience, this happens in about five children in every 100 we treat with an air enema. This is most likely to happen two to three days after the air enema, causing similar symptoms as before. The air enema might need to be repeated if this happens.

What is the outlook for children having this treatment?

About seven in every 10 children have the intussusception cured using an air enema, but the outlook depends very much on the individual child and the extent of the telescoping and blockage.

If the air enema fails to unblock the bowel or only partly unblocks it, your child will need to have an operation. Our website has more information on Intussusception and what an operation involves.

Compiled by:
The Radiology Department in collaboration the Surgery Department and with the Child and Family Information Group.
Last review date:
April 2016
Ref:
2016F0447