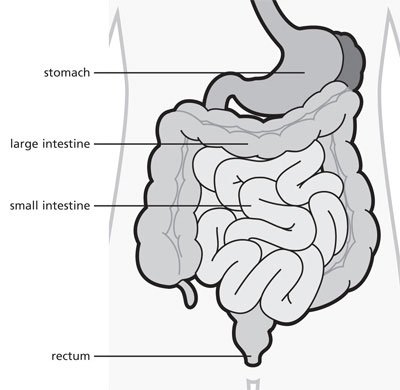 This information sheet explains the first phase of the assessment process to diagnose lower gastrointestinal dysmotility problems and what to expect when your child comes to Great Ormond Street Hospital (GOSH) for assessment.Great Ormond Street Hospital (GOSH) has a large internationally recognised gastroenterology unit. This unit specialises in the assessment and treatment of diseases of the gastrointestinal tract. There are a variety of reasons why children may have
gastrointestinal motility problems. It is therefore important to investigate them thoroughly so that the correct treatment can be offered. GOSH has the facilities needed for all the many investigations, tests and treatment your child may need.

The process of assessment involves a team of specialists (multidisciplinary team or MDT), some or all of whom you may meet during your child’s hospital admission:

How does the gastrointestinal tract work?

The gastrointestinal (GI) tract is a complex organ that extends as a hollow tube from the mouth to the anus. Its main function is to break down food so it can be absorbed into the bloodstream and then to expel the waste. The process of moving food through the GI tract involves a complex interaction between hormones (chemical messengers), muscles and nerves, so that food is squeezed rhythmically through the system (peristalsis).

Once food has been processed in the stomach, it empties into the small intestine where the majority of digestion and absorption occurs. Here it is mixed with bile and pancreatic juice containing enzymes (proteins that cause or speed up a chemical reaction).

The broken down nutrients are then small enough to pass through the wall of the small intestine, which contains small finger-like structures called villi, and then absorbed by the blood.

The blood is carried away from the small intestine through the hepatic vein to the liver, where it is filtered, toxins are removed and the nutrients are processed. The residue then passes into the large intestine, where water is absorbed to form solid faeces (poo).

The entire length of the gastrointestinal tract contains nerves and muscles that work together to move food through from the oesophagus to the anus using peristalsis. If a section of the intestines does not contain these nerves and muscles or they are present but not working correctly, peristalsis cannot occur so food cannot be pushed efficiently to the next part of the tract. This is referred to as a gastrointestinal motility problem or dysmotility.

When your child is first referred to GOSH, they will be offered an outpatient appointment with the Gastroenterology team. Within this appointment, all aspects of your child’s condition will be discussed, such as the symptoms your child has and when they first started, their usual eating habits and so on. The team will then decide if your child should be put on the Gastrointestinal Dysmotility Pathway.

The Gastroenterology team has developed this pathway to ensure that all children who have symptoms of dysmotility are assessed in a similar way and any decisions about treatment are reached in an open and honest way.

The Dysmotility pathway starts with a multidisciplinary team clinic appointment, where you and your child will meet with various members of the wider MDT including a general paediatrician, a psychologist and a dietitian.

We will speak to your child’s school and any other professionals involved with their care to help us understand your child’s problem better and how it impacts on their life. This is an important part of the assessment process – if you do not want us to talk to others involved in your child’s care we will need to understand your reasons and we may not be able to continue with the pathway.

This clinic appointment may be followed by a visit to the hospital to have any specialised tests that the gastroenterology team recommend. These are explained in more detail in the next section. Once this appointment and the tests are complete, the MDT will meet to develop a treatment plan; treatment will either continue here at GOSH or may involve discharge to your local hospital so that they deliver the treatment recommended by the team at GOSH.

The team will discuss this decision and future arrangements at another clinic appointment.

What tests and scans will my child need?

Your child my need a variety of investigations - this could include a period of time in hospital for observation of symptoms to identify any underlying gastrointestinal problems. Further information about each of these investigations (including Easy Read versions for people with learning disabilities) is available on our website.

Some of the investigations that might be suggested include:

Small bowel scanning – This is a scan which shows how quickly the gastrointestinal contents move into the small and large bowel. The test is performed with a liquid that shows up well on the scan pictures.

Contrast follow through (upper GI study) – This scan uses a contrast, a liquid that shows up well on x-rays, to show details of your child’s GI tract. Your child will need to swallow some of this contrast as a drink or in some solid food and then have an x-ray around four hours or so later.

Transit study – This is a test which shows how quickly food passes through the digestive system. Your child will be given some pellets to swallow on three consecutive days and then a few days later have an x-ray to see how far they have travelled through the GI tract.

Ultrasound scan – This uses sound waves to take pictures of your child’s body. The sound waves are of a much higher frequency than normal so you cannot hear them. A jelly is used to help conduct them inside the body. It is the same as the ultrasound scans used during pregnancy.

Colonic manometry – This is a test to measure how well the muscles and nerves in the large intestine work. While your child is under a general anaesthetic, a catheter (flexible plastic tube) is inserted into your child’s anus and passed up into the large intestine. Once your child has woken up from the anaesthetic, fluid is put into the catheter, which causes the nerves and muscles in the digestive system to start to move. This movement is detected by sensors contained in the catheter and recorded by a machine.

Antroduodenal manometry – This is similar to colonic manometry but looks at the muscles and nerves in the stomach and small intestine. While your child is under general anaesthetic, a catheter is put through your child’s nose, into their stomach and then to the small intestine. Once they have woken up from the general anaesthetic, fluid is put into the catheter, which causes the nerves and muscles in the digestive system to start to move. This movement is detected by sensors contained in the catheter, and the movement is recorded by a machine.

Biopsy – This is a procedure to take a tiny sample of tissue which can later be analysed
in the laboratory. This is carried out during a gastroscopy or colonoscopy using an endoscope. If a ‘full thickness biopsy’ is required, your child will be referred to the surgeons as this involves taking a larger sample of bowel in the operating theatre.

Magnetic resonance imaging (MRI) scan – This uses a magnetic field rather than x-rays to take pictures of your child’s body. MRI scanners are hollow machines with a tube running horizontally through its middle.

For some studies such as scintigraphy studies, pellet studies and colonic manometry, your child’s intestine will need to be cleared of faeces for all of the procedures looking at the colon. If they have a stoma already, the disconnected section will need to be cleared as well. We will explain about bowel preparation as how long it will take and how it will be carried out depends on your child’s constipation history.

In addition to these investigations, other general assessments may be suggested to look at particular areas more closely. These could include the immune system, metabolic system, genetics, bladder, liver and kidneys but will not be needed for every child.

Discussing the results of these tests and scans

The test results will be discussed by the team at GOSH and the doctor who referred your child in an MDT meeting after your child’s stay. This may result in further tests and scans or admission for surgery. After the meeting, the team will contact you to explain the next steps to be planned.

What are the options for treatment?

Before you make a decision about any of these treatments, we will discuss the advantages and disadvantages with you and explain why each one has been suggested. It is difficult to predict which treatment will be most suitable for your child as this is dependent on the results of the tests and scans. The options generally include the following, however, although some may not be suitable for every child.

A full feeding history forms part of the assessment process. This is important to see which feeds and feeding methods have been tried in the past, how your child tolerated these and what impact they had on their growth and weight gain. As a result of the full feeding history, the dietitian and medical team may suggest altering your child’s feed in some way, either in which feed is given or how it is given. These could include:

You will be involved in the decision making process about your child’s diet and we will give you full training and instructions before you go home. We will also liaise with your local team so you have support when you return home.

Your child may need to take some medicines orally to help bowel movement and any associated GI problems. In some instances the treatment needs to be given rectally, such as rectal washouts or enemas. There are various different types of medicine, some of which require regular monitoring with blood tests. All medicines have some side effects and the aim of this monitoring is to balance the benefits brought by the medicine with any unwanted side effects. We will make sure you understand fully about the medicine before your child starts taking it. Any medicine prescribed and dispensed through the pharmacy at GOSH will come with an information leaflet.

We know that the symptoms of dysmotility (for example, constipation, soiling, pain, indigestion) are difficult to manage and difficult to talk about. They often have a huge impact on the quality of life of children, young people and their families. Our psychologists can offer support around coping with these difficulties and limiting their impact on your family’s life. They can also offer interventions such as Cognitive Behavioural Therapy and Family Therapy which may further improve your child’s quality of life.

Some patients with intestinal dysmotility benefit from surgery. This generally is to form a channel to allow bowel washouts or irrigation to take place, or to form an artificial opening in the bowel (a stoma) to allow your child to pass poo and decompress the bowel. Stomas are reversible, and therefore we would reassess your child’s need for a stoma on an ongoing basis if this is recommended. We have a dedicated team of stoma nurses to look after children and families who are considering or undergoing this treatment.

Following discharge after an inpatient stay, we will send a summary of our discussions and results to you, your family doctor (GP), local consultant and any other members of your child’s healthcare team. You and your child will be invited to come to clinic to discuss the results of your tests and the treatment plane with our multidisciplinary team. The aim is to work in collaboration with your local team to develop a treatment plan, which may require further outpatient appointments or inpatient stays.