This page from Great Ormond Street Hospital (GOSH) explains tracheal stenosis, how it can be treated and what to expect when a child has treatment. This page mainly concentrates on the ‘long segment’ type of tracheal stenosis and its treatment.The trachea (windpipe) is the airway tube leading from the throat to the lungs. It is not made up of solid tissue, but rather a series of C-shaped rings of cartilage linked together, a bit like vacuum-cleaner tubing. Normally, the cartilage gives the trachea its structure. When a child has tracheal stenosis, the rings are often fixed and O-shaped so do not allow for growth. These are called ‘complete tracheal rings’. If a child has ‘long segment’ tracheal stenosis, more than two-thirds of the trachea is affected. Some children only have a few affected rings (short segment stenosis).

What are the symptoms of tracheal stenosis?

There are two main symptoms associated with tracheal stenosis. A child will usually have noisy breathing (also called stridor). The other symptom is sudden and severe breathing problems, where a child could stop breathing and turn blue. This can be life-threatening if the child is not given first aid immediately.

Sometimes the problem may only become apparent after the child develops a chest infection and has more severe breathing difficulties that are out of proportion to the infection. This may include having to be on a ventilator (breathing machine).

Tracheal stenosis can be associated with other problems, such as a heart defect so the doctors will examine the child closely to check if this is the case.

How is tracheal stenosis diagnosed?

Tracheal stenosis is often first suspected after a child has had a severe breathing problem, but the diagnosis is confirmed using various tests.

These include a bronchoscopy, and bronchogram with optical coherence tomography, which allows the doctors to look inside the trachea. All children have a CT scan as well to give the doctors detailed pictures of the trachea and lungs. All children have an ECHO (echocardiogram or ultrasound scan of the heart) to check that the heart and blood vessels are correctly connected.

How common is tracheal stenosis?

How can tracheal stenosis be treated?

Treatment depends on the number of tracheal rings affected. If a child only has one or two fixed rings of cartilage or is not having too many problems, the doctors might suggest ‘watching and waiting’ for a while to see if the situation improves. If treatment is needed, the affected rings can be removed and the two ends of the trachea joined together.

If a child has ‘long segment’ tracheal stenosis, an operation called a slide tracheoplasty may be needed. This is often carried out as an emergency operation to correct severe and life-threatening breathing problems.

What is a slide tracheoplasty? 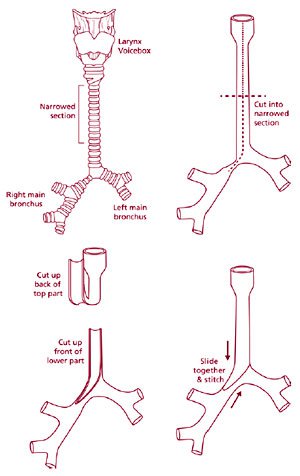 The operation may be carried out urgently, and a child may have been transferred to GOSH from another hospital. When families arrive at GOSH, They will meet the Tracheal Team, who will be caring for the child. The doctors will explain the operation in more detail, discuss any worries parents may have and ask them to give their permission for the operation by signing a consent form.

Another doctor will visit the family on the ward to explain about the anaesthetic. The doctors will ask for some blood samples to check that the child is well before the operation. If the child has any medical problems, like allergies, please tell the doctors about these.

The operation lasts for about four hours and is carried out while the child is under a general anaesthetic. He or she will be connected to a heart-lung bypass machine during the operation so that the surgeon can safely operate on the child’s trachea.

The surgeon will make an incision (cut) on the child’s chest and separate the trachea into two parts, top and bottom. The top part will be cut down the back of the trachea and the bottom part down the front. The surgeon will then slide the two parts together, so that one part is on top of the other. He or she will then stitch the two parts in place so that the trachea is shorter but stronger and wider. If you slide your index fingers over each other you will get a good idea of the principle of the operation.

Three chest drains will be inserted into the bottom of the incision to drain away any fluid that collects there. The child will also have a drip into a vein in the neck, an arterial line in the wrist, another drip in his or her hand and a urinary catheter to drain away urine from the bladder.

As with all operations there are associated risks and complications. We are not suggesting that they will happen, but we believe that it is important that people know about what might occur. The surgeon will explain the specific risks associated with the child’s operation.

Bleeding immediately after the operation is a risk. Chest drains are there to allow blood to drain away from the wounds and the bleeding usually stops after a few hours. If it continues and medications do not stop the bleeding, the child may need to go back to the operating theatre for investigation. There is always enough blood available to replace what has been lost. Chest drains also help the doctors to see if there is any leak of air from the repair of the trachea, although this is very rare.

Infection is a risk with any operation so the child will have a course of antibiotics to reduce the chance of this happening. The nurses will wash out the operation site using an antiseptic liquid through the chest drains for the first two days.

Another risk, affecting around a third of children, is that the trachea remains too narrow after the operation. In some children, their trachea becomes floppy afterwards, causing breathing problems. If the child’s trachea is too narrow, it can be widened using a balloon in another procedure under general anaesthetic. If it is too floppy, a cage called a stent can be used to support the trachea. This procedure is also carried out under general anaesthetic.

There is a very small chance that the surgeon will not be able to operate because the child’s condition is too serious. Previous surgery to the trachea can also make operating more difficult, especially if scar tissue has formed in the past. It is also possible that the surgeon will discover a previously unconfirmed heart defect, which could affect the child’s recovery.

The child will go to the Cardiac Intensive Care Unit to recover. He or she will have a tube inserted into the nose or mouth and be connected to a ventilator to help with breathing. This allows the trachea to rest as it heals. Even though the child is in intensive care, parents can still be involved in his or her care if they feel able.

During the first week, the child will need regular chest physiotherapy to clear any secretions or mucus. This will continue until the child is well enough to cough. Around two days after the operation, the child will have another bronchoscopy at the bedside. One week later, they will have a bronchoscopy and bronchogram study (without optical coherence tomography this time) to see how the trachea is healing. The amount of time it takes to ‘wean’ a child off the ventilator varies.

The team will explain the plan and the child’s daily progress. When children have been weaned from the ventilator, they will move to Bear Ward to recover further. The child will still have regular bronchoscopies as clinically indicated just to check how the trachea is healing. After each bronchoscopy, the child’s breathing may sound noisy but this is expected. It is also common for children to develop a high temperature while they are recovering. Parents can give their child regular children's pain relief medicine such as paracetamol or ibuprofen according to the instructions on the bottle. During this healing phase, it is sometimes necessary to stretch the tracheal diameter from inside using a balloon. This is done under anaesthetic and may need to be repeated a couple of times.

During the child’s stay on Bear Ward, the team will start to plan when he or she can go home. There will be some teaching sessions to make sure parents are confident in looking after their child after the operation. The child may need a nebuliser to keep the secretions loose or sometimes antibiotics to take home. The team will also explain about the child’s follow up care, which involves regular bronchoscopy and bronchogram studies, although eventually these may be carried out at a hospital nearer to home.

We will send details of the child’s operation to the parent and the child's family doctor (GP). The child should have the flu vaccine every year and also antibiotics if he or she has a cough or cold. The child should avoid rough play for a while after the operation, but can start to do more activities, as he or she feels able.

When you get home

Call the team if:

We recommend that all parents learn Basic Life Support (BLS) - free classes are available from St John's Ambulance or the Red Cross - search online for details of courses near you.

What is the outlook for children with tracheal stenosis?

In our experience, the first year after the operation can be the most trying for parents. The child has had major surgery and parents will be worried about how they are recovering.

The child may still have breathing problems, but these are likely to be less severe than before the operation. The follow-up programme can take up a lot of time, as appointments can be on a weekly basis to start but will reduce over time to every month or so.

Some children (around a third) need to have further procedures to widen the trachea or strengthen it if it becomes floppy (malacic). These procedures are carried out under a general anaesthetic and will require a stay in hospital.

During the second year after the operation, children seem to settle more and have fewer breathing problems. The child will only need a bronchoscopy every six months or so and yearly follow up appointments. The child should be able to have a near normal life, attending school or nursery, although feeding can take some time to establish. They may seem smaller than other children of the same age for the first few years, but the majority catch up in time, with special feed. Please speak to the dietitians about this if worried.

Compiled by:
The Tracheal Team in collaboration with the Child and Family Information Group
Last review date:
August 2016
Ref:
2016F0265