Bertie: a manikin made for multidisciplinary needs

Bertie was designed by Laura and the simulation team as part of an immersive simulation course for multidisciplinary teams who manage intussusception in the radiology department.

Intussusception is a surgical emergency when a segment of bowel ‘telescopes’ on itself. Treatment with air enema reduction by radiologists can reduce complications and need for surgery but it is seen infrequently, or sometimes not at all during a radiologists training. It was therefore identified as a training need by the radiology team, who approached the simulation centre for support.

The simulation team did not let the lack of a suitable manikin get in their way, and swiftly set about designing their own!

Using a system of tubing with variable internal diameters and balloons, the team built a specialist manikin, Bertie, which can simulate air reduction, including accurate generation of pressure during air insufflation. Bertie is also able to simulate abdominal distension to reflect an important complication of the procedure, pneumoperitoneum (air outside of the bowel walls). Fluoroscopy footage was obtained which can synchronise with the simulated patient’s condition and procedure on a nearby screen. 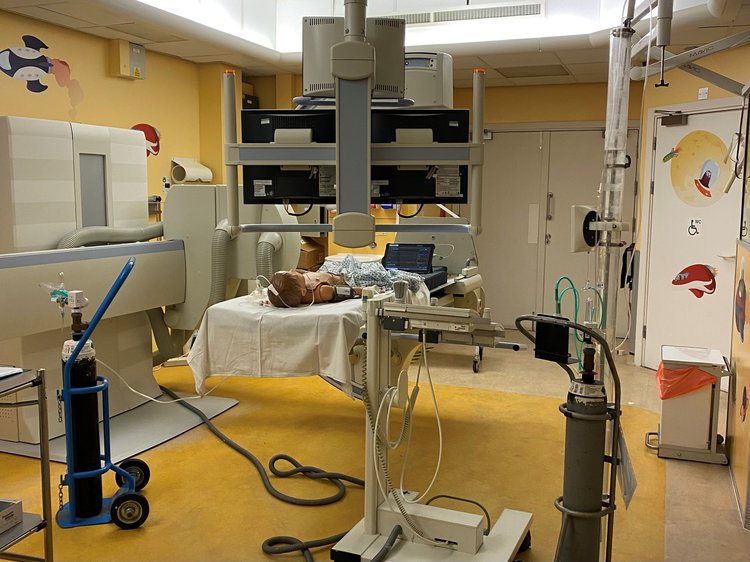 So far, the team have run two immersive simulation courses using Bertie, with a total of 22 participants (13 radiographers, seven radiology registrars and two surgical registrars). Scenarios were carefully designed around successful and unsuccessful procedures, and procedures with complication that required further emergency management.

Courses ran within the interventional radiology department itself, increasing realism and allowing teams to practice in their usual clinical environment. Twenty-seven per cent of candidates had never encountered intussusception before in clinical practice, and feedback showed an increased confidence in managing this emergency from 3.7/10 to 6.6/10.

It’s been wonderful to have the opportunity to share our work with the simulation and GOSH community and we hope other hospitals will find it useful. We really enjoyed such a creative design challenge to please get in touch with any other scenarios you would like help with!

Laura presented this project at the GOSH conference in November 2021, as well as at the Association for Simulated Practice in Healthcare (ASPiH) conference in the same month. Looking back on the experience, Laura said “It’s been wonderful to have the opportunity to share our work with the simulation and GOSH community and we hope other hospitals will find it useful. We really enjoyed such a creative design challenge to please get in touch with any other scenarios you would like help with!”

Bertie is made from non-specialist equipment and would be easily reproducible at low cost in multiple settings. As well as improving training and ultimately patient safety at GOSH, we hope this is something that other centres may look to develop.

If you would be interested in creating your own Bertie Bowel, or have any comments or questions, or suggestions for another project please get in touch with the simulation team. Our email address is

The making of our hyper-realistic moulage heart

In September 2021 we welcomed our first cohort of regular medical students to Great Ormond Street Hospital on a pilot scheme placement.