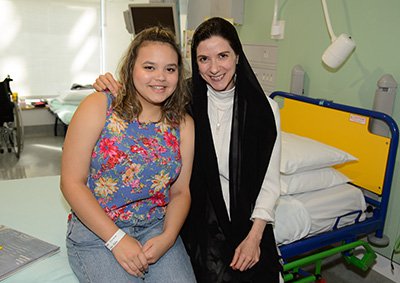 Plans to open the world’s first centre dedicated to paediatric research into rare diseases at Great Ormond Street Hospital (GOSH) are to become a reality thanks to a £60 million gift from Her Highness Sheikha Fatima bint Mubarak.

The gift, given by the wife of the late Sheikh Zayed bin Sultan Al Nahyan, founder of the United Arab Emirates, is in recognition of GOSH’s unique position to advance treatments and cures in this area. It builds on the legacy of her late husband who had an active interest in global issues affecting the wellbeing of children. It is also given in gratitude to the hospital for the pioneering treatments it has provided to children from around the world, including those from the UAE.

The centre is a partnership between GOSH, University College London (UCL) and the Great Ormond Street Hospital Children's Charity. The building, whose site is adjacent to the hospital and the UCL Institute Child Health, is set to bring hundreds of clinicians and researchers together where they will see patients and access state-of-the-art laboratory facilities under one roof.

Rare diseases represent a considerable health burden globally as taken together they affect one in 17 people at some stage of their lives. They are particularly prevalent in children and nearly one third of the children affected will die before their fifth birthday. GOSH and UCL are uniquely placed to translate ground breaking research into better treatments and cures as together they have more dedicated paediatric researchers into rare disease and see more children with rare diseases than anywhere else in the world.

Her Highness Sheikha Fatima bint Mubarak said: “The most important work that we can undertake as a global society is to improve the health of future generations so that communities can thrive and grow. To reach this goal, we must form collaborative partnerships that have the potential to benefit all children. We are honoured to support the mission and work of Great Ormond Street Hospital.”

Baroness Blackstone, chair of Great Ormond Street Hospital said: “This gift is truly transformative and we are incredibly grateful. There is an urgent and compelling case to use our expertise and harness the recent advances in science and technology to accelerate the discovery of new treatments and cures in this area.

“This facility will be a centre of excellence for translational research and a beacon of hope for children with rare diseases around the world.”

Professor Michael Arthur, University College London President and Provost, said: “In recent years GOSH and UCL have achieved some amazing breakthroughs in the treatment of rare diseases and it is without question the partnership between academic science and clinical medicine that has made the progress possible.

“This state-of-the-art centre will enable a step change in research. In particular it will drive our experts to progress new and personalised ways to diagnose and treat these children by further developing gene and cell therapies and manufacturing increasingly complex medical devices.”

Representing Her Highness Sheikha Fatima bint Mubarak, Her Excellency Professor Maha Barakat will visit Great Ormond Street Hospital today to mark the announcement. On her visit she will meet some of the patients that could benefit from the research that will be undertaken in the new centre.

Her Excellency Professor Maha Barakat said: “For more than 160 years, Great Ormond Street Hospital has provided children with the medical care they have needed, and this new centre will be an extension of this essential work. We are indebted to the people of Great Ormond Street Hospital who dedicate themselves to helping thousands of children every year who are suffering from life-threatening and life-limiting conditions.”

The centre will be built on a plot of land on Guilford Street. The award-winning architects Stanton Williams are working with the clinical and academic staff to create a high quality building with outstanding research and clinical facilities. Currently the first phase of the public consultation process is underway, with the centre expected to open in 2018.

It is anticipated that the centre will house approximately 400 academics and clinical staff and feature more than 150 laboratory bench positions. The outpatients’ facility will accommodate 48 clinical staff, and 140 patients with accompanying family members.

The total cost of the centre is expected to be £90 million. The full cost has been met by £20 million of fundraising income from Great Ormond Street Hospital Children's Charity and a £10 million grant from the Higher Education Funding Council for England’s Research Partnership Investment Fund.

Great Ormond Street Hospital for Children NHS Foundation Trust is the country’s leading centre for treating sick children, with the widest range of specialists under one roof.

The 334-bed hospital has more than 255,000 patient visits every year, including about 40,000 inpatients. With the UCL Institute of Child Health, it is the largest centre for paediatric research outside North America and plays a key role in training children’s health specialists for the future.

Rare diseases in children include childhood cancers, cystic fibrosis and muscular dystrophy and there are over 6,000 conditions in total.

Individually, each disease affects less than one in 2,000 people. But as a group, they will affect one in 17 of us at some point in our lives. 75 per cent of sufferers are children, and nearly one third will die before their fifth birthday.

Most rare diseases are caused by a genetic defect, which means that children are born with the condition and will not get better by themselves. The symptoms of rare disease can often be very serious, making patients very sick or causing disabilities that impact on how long they will live and their quality of life.

GOSH’s research successes in the area of rare diseases include:

Her Highness is a leading figure in supporting initiatives and projects to empower women locally, regionally and internationally. Her Highness Sheikha Fatima is also known for her focus on family and children.

Her Highness has many active roles, including:

Her Highness Sheikh Fatima established many organisations in the UAE, including:

Some of Her Highness Sheikha Fatima bint Mubarak’s charity and donations include:

Sheikh Zayed bin Sultan Al Nahyan, Ruler of Abu Dhabi from 1966 to 2004 and First President of the United Arab Emirates from 1971 to 2004, is widely recognised as the ‘Father of the Nation’. He established bodies including the Zayed Charitable and Humanitarian Foundation and the Abu Dhabi Fund for Development, as well as institutions like the Red Crescent Society.

One of the first to join the international campaign against Guinea worm disease, the late Sheikh Zayed bin Sultan Al Nahyan, Founding Father of the United Arab Emirates, invested significant resources in the 1990s to help launch the Guinea Worm Eradication Program. This early investment enabled the program, based at the Carter Center, to establish global operations and accelerate interventions against Guinea worm disease.

Continuing the work of the late Sheikh Zayed bin Sultan Al Nahyan, in 2012, His Highness Sheikh Khalifa bin Zayed Al Nahyan, President of the UAE, pledged US$10 million towards the vision of ending Guinea worm disease by 2015. Led by the Carter Center and supported by two other main donors: Bill & Melinda Gates Foundation; and the Children’s Investment Fund Foundation, together, the three donors provided a total of US $40 million.

In 2009 the Sheikh Zayed Institute for Pediatric Surgical Innovation was established at the National Medical Center in Washington DC after a $150million gift from Abu Dhabi. The gift followed a longtime relationship between the hospital and the United Arab Emirates, and reflects a shared vision to advance medical innovation to improve children's health worldwide.