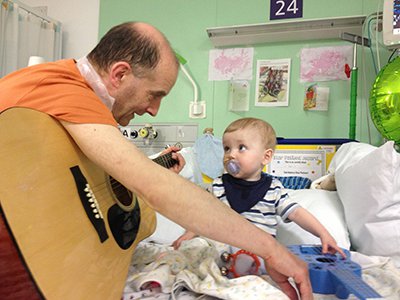 A study of children at Great Ormond Street Hospital (GOSH) has scientifically proven what parents have suspected for centuries – that lullabies really do help to soothe poorly children and reduce their perception of pain.

Results of the study, published by the journal Psychology of Music, show that a group of child patients at the hospital experienced lower heart rates, less anxiety and reduced perception of pain after they had lullabies sung to them.

However the same group of children experienced lower levels of such benefits when they had stories read to them instead of lullabies.

The research is a joint project between Great Ormond Street Hospital and the University of Roehampton, and funded by the British Academy.

GOSH music specialist Dr Nick Pickett, who oversaw the study at the hospital and has worked with cardio-respiratory patients at GOSH for the past 20 years, said:

“Parents have been singing to their children for thousands of years and they have always instinctively known that it helps their children to relax – but it’s exciting to have scientific evidence that lullabies offer genuine health benefits for the child.

“The findings also show that it’s not simply attention from an adult that soothes children, because the children did not experience the same benefits when they had stories read to them. There is something inherently special about music and singing to a child that achieves these results.”

Academics involved in the study included Professor David Hargreaves of the University of Roehampton, a leading expert on music and psychology, and Dr Elena Longhi, a psychologist previously based at both Roehampton and GOSH’s research partner the UCL Institute of Child Health, and now based at the University of Milan Bicocca, Italy.

The music study involved 37 paediatric patients at GOSH with cardiac and/or respiratory conditions, between the ages of seven days and four years old. Each child was involved in three 10-minute sessions – involving lullaby-singing, story-reading and a third ‘control’ session with no interaction – and their physiological responses and perceived pain levels were measured before and after each session.

The children’s heart rates and oxygen levels were measured with a non-invasive device called a Pulse Oximeter, and their pain level was measured on the CHEOPS scale (Children’s Hospital of Eastern Ontario Pain Scale), which is a well-known and trusted behavioural scale used to assess pain in young children. The CHEOPS scale includes six categories: crying, facial, child verbal, torso, touch and legs, and scoring ranges from 4 (no pain) to 13 (the worst pain).

After the lullaby session, the children’s average heart rate had reduced from 134.1 to 128.7 and their average CHEOPS pain rating had fallen from 6.21 to 5.64. In contrast, the story-reading and control sessions did not produce any similar changes in these measurements.

Dr Pickett said live performance of a lullaby was likely to be more effective than a recorded version, adding: “Babies and young children respond to the singer’s voice first and instruments second – and more than one instrument can actually become quite confusing and less effective. Facial expressions and visual stimulation during the performance of a lullaby are just as important, and live performance allows the adult to adapt their singing depending on the child’s mood.

“Many of today’s well-known lullabies are at least 150-200 years old, but they are gradually evolving and improving as they are passed down from one generation to the next.”

The journal article is entitled, ‘Wellbeing and hospitalized children: Can music help?’ and is available on the online version of Psychology of Music, SAGE Publications. The abstract is freely available here: http://pom.sagepub.com/content/early/2013/08/22/0305735613499781.abstract The article will also be published in the print edition in due course.

For more information about the study, a full copy of the research paper or an interview with GOSH music specialist Dr Nick Pickett, please contact Caroline Butcher in the GOSH press office on 020 7239 3178 or email caroline.butcher@gosh.org

Great Ormond Street Hospital is the country’s leading centre for treating sick children, with the widest range of specialists under one roof. With the UCL Institute of Child Health, we are the largest centre for paediatric research outside North America and play a key role in training children’s health specialists for the future.

Our charity needs to raise £50million every year to help rebuild and refurbish Great Ormond Street Hospital, buy vital equipment and fund pioneering research. With your help we provide world class care to our very ill children and their families.