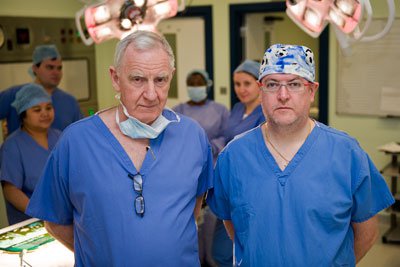 The second episode of the BBC documentary following patients, families, doctors, surgeons and nurses at Great Ormond Street Hospital (GOSH) airs tonight on BBC2.Tonight’s programme entitled ‘A Chance at Life’ follows Mr Edward Kiely, one of the UK’s most experienced paediatric surgeons and his colleagues in the general surgical team, as they take on some of the most complex medical cases in the world.

There are several cases featured in the programme. The first of which is nine-year-old Eliana who has a 3kg tumour in her stomach, which though benign, if left untreated will pose a serious threat to her life. Despite 15 months of chemotherapy to shrink the growth which had been considered inoperable, surgery is now considered the only option.

Seventeen-year-old Sebastian from Colombia has come to GOSH to receive a potentially life-saving but highly complex operation. Born with a hole in his oesophagus, Sebastian spent the first 18 months of his life in hospital where he underwent between eight and ten operations, he now has to be fed intravenously every day. As Sebastian is 17, surgeon Mr Joe Curry must work with him so that he can consent to the operation which poses a serious threat to his life.

When a seriously ill new born baby arrives at the hospital in the middle of the night, Mr Kiely operates to repair a suspected perforated bowel. However the child didn’t have a heartbeat until 17 minutes after it was born and the doctors believe that the child has potentially serious brain damage.

Finally, five-year-old Aarin has returned to GOSH following an unsuccessful attempt to remove a tumour from his abdomen in 2010. In the meantime he has been undergoing experimental treatment in Germany in an attempt to shrink the tumour, Mr Kiely will now make one final attempt to remove it.

The show documents the difficult decisions that patients, families and the surgeons must take as they try to balance the life-threatening risks posed by surgery against the potentially life-changing benefits.

For more information about the series and how you can support the hospital, visit our Great Ormond Street documentary series section.

Great Ormond Street Hospital for Children NHS Foundation Trust is the country’s leading centre for treating sick children, with the widest range of specialists under one roof.
With the UCL Institute of Child Health, we are the largest centre for paediatric research outside the US and play a key role in training children’s health specialists for the future.
Our charity needs to raise £50 million every year to help rebuild and refurbish Great Ormond Street Hospital, buy vital equipment and fund pioneering research. With your help we provide world class care to our very ill children and their families.