Auditory process disorder (APD) affects how the brain interprets sound rather than how sound is carried through the ear to the brain. 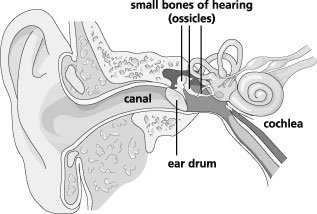 The ear consists of three parts, the outer ear, the middle ear and the inner ear.

Sound waves enter the ear canal and cause the eardrum to vibrate. The sound then passes through the middle ear via the three small bones of hearing (ossicles) on to the inner ear, which is filled with fluid. The movement of the fluid in the cochlea stimulates the hair cells inside it to trigger a nerve impulse, which is carried to the brain by the auditory nerve. The brain then interprets these nerve impulses as sound.

When someone has APD, sound enters the ear canal and passes through the middle and inner ear as usual. It then travels to the brain through the auditory nerve. Once the sound has arrived in the brain, there are problems with interpreting it, for instance, recognising the sound or understanding speech.

Doctors do not really know what causes auditory processing disorder (APD) but research is ongoing to understand more about it.

There may be a genetic component to it, as parents sometimes report having had similar problems to their children when they were young. It may also be caused by the brain being ‘wired’ slightly differently in some children who had lots of ear infections in childhood so that message signals are passed from cell to cell less effectively than usual.

Other conditions can affect children alongside APD including dyslexia, attention deficit with or without hyperactivity disorder and speech/language problems.

We are not sure how many children and young people are affected by APD, but estimates from around the world suggest between three and five per cent of children have APD to some degree.

What are the signs and symptoms of auditory processing disorder?

Parents may suspect that their child is not hearing or listening properly at quite a young age, but it is often at school that the difficulties become more obvious. Although children with APD may seem to have a hearing impairment, this is not usually the case as hearing for pure tones is within the normal range when tested.

Children with APD are most likely to have difficulty in understanding speech especially in noisy environments, like a classroom or crowded shopping centre. They may also have trouble concentrating and reading when background noise is present. These problems may lead to difficulty in understanding and remembering instructions, speaking clearly and development of reading skills.

Teachers may be concerned when a child does not start reading at the usual age or is slow to pick up reading skills. However, these difficulties may be caused by other problems that affect communication.

How is auditory processing disorder diagnosed?

When a child with APD has a common hearing test, they do not usually show any hearing impairment, as the test is carried out in a quiet room with minimal distractions. Other more complex tests are needed to diagnose APD such as hearing speech in different levels of background noise, pitch discrimination and sound pattern recognition tests, tests to determine the ability to detect subtle changes in sound, for instance, with comparison of results with children of a similar age.

How is auditory processing disorder treated?

There is normally no medicine or procedure that can ‘cure’ APD. However, there are several strategies that could reduce the effects of APD on everyday life. Training programmes to address specific issues or to improve listening and concentration can be very effective if practised regularly.

There are also some adjustments that can be made at school to make things easier, such as sitting near the front of the classroom, asking the teacher to check that your child is listening and back up verbal instructions with written ones. Making adjustments at home can also be helpful, such as keeping background noise from the television or radio to a reasonable level. Asking your child to repeat back what you have said is also helpful.

For many children, APD improves as they grow older, usually because they incorporate coping strategies into their everyday life. With reasonable adjustments, most children and young people have a successful school and work life.

Compiled by:
The Audiology department in collaboration with the Child and Family Information Group
Last review date:
September 2022
Ref:
2014F1485

Causes, symptoms and treatment of auditory processing disorder and where to get help