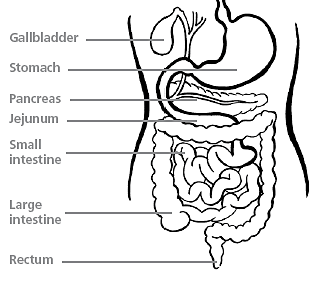 Some children also breathe some of the mixture into the windpipe (aspiration), which can irritate the lungs and cause chest infections.

Gastro-oesophageal reflux is very common in the first few weeks and months of life, as the sphincter (ring of muscle) at the base of the oesophagus has not matured yet. Many babies with reflux gradually improve as they grow, particularly when they start to eat more solid food and feed in an upright position in a high chair for instance.

In some children, however, the reflux continues. This is caused by a combination of factors which may include a wider than usual opening in the diaphragm around the oesophagus and a weakened sphincter. Children with developmental problems such as cerebral palsy or Down syndrome are more likely to continue to have gastro-oesophageal reflux in childhood and adolescence.

What are the signs and symptoms of gastro-oesophageal reflux?

The main sign of gastro-oesophageal reflux is frequent spitting up or regurgitation after feeds. This is often accompanied by abdominal pain or general crankiness in the hours after feeding. Over time, babies with reflux may not gain weight as expected (failure to thrive) and may have frequent chest infections due to aspirating (breathing in) stomach contents into the windpipe and lungs. The inside surface of the oesophagus may become inflamed due to contact with stomach acid, which may lead to scarring and narrowing.

How is gastro-oesophageal reflux diagnosed?

In most cases, the doctor will diagnose gastro-oesophageal reflux after taking a detailed clinical history – asking about symptoms and feeding patterns. They may weigh the child to see whether they are gaining weight as expected. Sometimes, more detailed diagnostic tests are needed – these can include:

The results of these tests are reviewed to confirm the diagnosis of gastro-oesophageal reflux and assess its severity.

How is gastro-oesophageal reflux treated?

Initially, the child’s feeds and feeding pattern may be adjusted to see if that improves the symptoms. For instance, feeding smaller amounts more frequently will be suggested along with changes to their feeding position, such as sitting them in a more upright position during feeds and immediately afterwards.

The head of their cot can also be raised by placing the legs on wooden blocks – do not use pillows to raise a child’s head as this can increase the risk of cot death – it is safer to tilt the entire cot. Other options include switching feed formula to types less likely to cause reflux and adding thickening agents to feeds so they are less likely to flow back up the oesophagus.

Medications may also be suggested – some form a barrier on top of the stomach contents to reduce the risk of them flowing backwards, while others damp down acid production in the stomach. Another type of medication speeds up the rate at which feed passes from the stomach into the duodenum and intestines. All these medications take some time to work but can be very helpful for the majority of children.

If a child has severe gastro-oesophageal reflux which is not controlled with medication or is causing significant complications, your doctor may recommend an operation called a fundoplication to prevent reflux. Before reaching this decision, the severity of the child’s reflux will usually be assessed with an upper GI contrast study and a pH or impedance study. As every child is different, the decision to recommend surgery will only be made after these assessments have been completed. The fundoplication operation uses the top of the stomach to strengthen the sphincter so it is less likely to allow food, drink or acid to travel back into the foodpipe.

Most children see an improvement in symptoms, especially after the fundoplication operation, although some long-term effects may continue to be troublesome. The child will continue to be reviewed regularly by their local team.

Compiled by:
The Department of General Surgery in collaboration with the Child and Family Information Group.
Last review date:
October 2018
Ref:
2018F0737