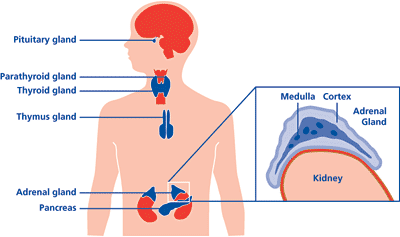 Congenital adrenal hyperplasia is group of inherited conditions that are present at birth (congenital) where the adrenal gland is larger than usual (hyperplasia). This page from Great Ormond Street Hospital (GOSH) explains about the medical condition congenital adrenal hyperplasia (CAH) and what to expect when your child comes to GOSH for assessment and  treatment.In CAH, the body is missing an enzyme (chemical substance) that stimulates the adrenal glands to release the cortisol hormone. Lacking this hormone means that the body is less able to cope with physiological stress, which can be life threatening. It also makes the level of androgen (male hormone) increase, which causes male characteristics to appear early in boys or inappropriately in girls.

CAH is an inherited disorder, that is, it is passed on from parent to child. Most types of CAH are autosomal recessive disorders; this means that both parents are carriers of the disease. Human beings have about 20,000 to 30,000 different genes, each of which has a function in making an individual person. The genes are arranged in pairs (one of the pair from each parent) on 23 chromosomes. Inevitably, some of these genes are faulty; a normal gene can overcome a faulty one, but if both genes in the pair are faulty, the genetic instructions cannot work.

Most people carry different faulty genes but in CAH (and other recessive conditions) parents, though healthy themselves, carry the same faulty genes, and risk passing them on to their children. Each pregnancy carries:

Although the chance of the child being affected is 1 in 4 with each pregnancy, it is not unusual for consecutive children to be affected.

In a small proportion of people, CAH is caused by a gene mutation (change) that happens by chance and cannot be predicted. A number of genes have been identified as causing different types of CAH – for instance, the most common form of CAH is called 21-hydroxylase deficiency and results from the gene labelled CYP21 being absent or changed. This means that aldosterone and cortisol are not produced but production of androgen is unaffected. The gene affected results in different types of CAH, affecting people to varying degrees from mild to severe.

CAH affects boys and girls in equal numbers, affecting between one in 10,000 and one in 18,000 children born each year.

What are the signs and symptoms of CAH?

The symptoms that present and the age at which they become apparent depends on the degree of cortisol and/or aldosterone deficiency. Boys with severe CAH show symptoms soon after birth, when a baby develops heart rhythm abnormalities, dehydration and vomiting. The levels of minerals (electrolytes) in the body are also affected, particularly showing low salt levels (hyponatraemia) and low blood sugar levels (hypoglycaemia).

Females with severe CAH are born with virilised (male looking) genitalia, so confusion as to the sex of the baby may occur. This is referred to as atypical or ambiguous genitalia. They too have low levels of minerals, especially salt, so show similar symptoms to boys.

Children with mild CAH may not have the same mineral imbalances as more severely affected children. Later, other symptoms caused by the increase in androgen develop. Girls will have abnormal or absent periods, a deep voice, early puberty and facial hair. Boys will have an enlarged penis, small testicles, early puberty, acne and a deep voice.

Both girls and boys may appear tall for their age but usually end up being short as adults if the diagnosis is not made quickly and treatment commenced.

How is CAH diagnosed?

Most cases of CAH are diagnosed soon after birth or in early childhood, but less severe CAH may not become apparent until a child does not start puberty at the expected age. CAH can be diagnosed before birth now that the affected gene has been identified.

If a baby is born with ambiguous genitalia, blood tests are usually used to determine genetic gender. Blood and urine tests are also used to work out the levels of minerals and hormones in the body, so that they can be replaced. X-rays to look at a child’s bone age may also be suggested. Genetic testing may be used to identify the specific type of CAH and the associated gene deficiency or mutation.

How is CAH treated?

Children with CAH are usually cared for by a multidisciplinary team including endocrinologists (hormone specialists) and urologists (genitourinary system specialists). Initially, children with CAH will need to be stabilised with intravenous fluids to restore their electrolyte levels. Once stable, cortisol and/or aldosterone replacement therapy can start with repeated blood tests to monitor hormone levels so the most effective dose can be prescribed.

Children with CAH will need to take replacement cortisol and aldosterone every day for the rest of their lives. However, if a person with cortisol deficiency becomes unwell, they are unable to increase the production of cortisol in their system to help the body cope and this could be life threatening – further details are available in our Cortisol deficiency and steroid replacement therapy information sheet.

If precocious puberty (puberty starting before the expected age) occurs, further hormone treatment may be required.

Long term follow up monitoring is essential for children with CAH. They will need regular blood tests to monitor hormone levels in the body and adjustments of steroid replacement doses. Men usually have normal fertility provided they have been optimally treated, but some women with CAH may have problems conceiving so may require additional help to have children. Once pregnant, women with CAH should carry the baby to term but may require a caesarean section to deliver. As CAH is an inherited disorder, genetic counselling may be helpful.

Compiled by:
The Endocrinology department in collaboration with the Child and Family Information Group
Last review date:
October 2018
Ref:
2018F1359