About the Psychological Medicine Team Service

Children with physical illness, and especially those with neurological symptoms and problems, are more likely to have emotional, behavioural and learning difficulties. These psychological problems often have a significant impact on both the child and their family, and their school experience. These problems are nobody’s fault and may be related to the underlying health problem, but they are often easily treated. The team works in the overlap between paediatrics, neurology and psychiatry/psychology.

Below are our clinical outcomes for the care we provide to children and young people with Tourette syndrome and non-epileptic seizures.

Tourette syndrome is a neurological problem characterised by involuntary movements (motor tics) and sounds (vocal tics). Individuals with Tourette's syndrome may also have emotional and behavioural problems such as obsessive compulsive disorder, attention deficit hyperactivity disorder, difficult behaviour or learning problems. Tourette syndrome affects about 1 per cent of people in the UK. Read more about our Tourette Syndrome Service.

‘Goal-Based Outcomes’ (GBOs) is a nationally adopted Patient-Reported Outcome Measure (PROM) for capturing goals set by the child/young person (where possible) and the parent, which they would like to achieve through the course of treatment. A scale of 0–10 is used, with higher scores indicating greater progress towards the goal being achieved.

GBOs are truly patient-centred outcomes because they are set by the patient (or parent) and reflect their specific goals. Goals are individually set and rated prior to treatment, then they will be offered for re-rating at the end of treatment. Goals are highly individual but, for example, might include statements such as:

The data below was collected from patients and parents at the beginning and end of psychoeducational group treatment. ‘Psychoeducation’ is a formal term used to describe learning about a condition. Research has shown that people with conditions such as Tourette syndrome – and the important people in their lives – really benefit from understanding more about the condition. We have devised group-based psychoeducational interventions at GOSH as this enables sharing of experiences by participants and additional expertise from the clinicians who facilitate the groups. 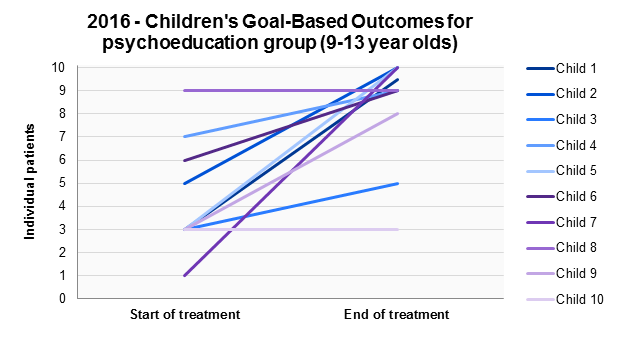 The graph above shows that eight of the 10 children who attended the group reported progress in how much they had achieved a goal they set at the beginning of the treatment. Typical goals included meeting other people with the condition, understanding Tourette syndrome better, and having strong strategies for living with tics.

These results are based on goals that parents set for themselves during parent groups run in parallel to the children’s group treatment. 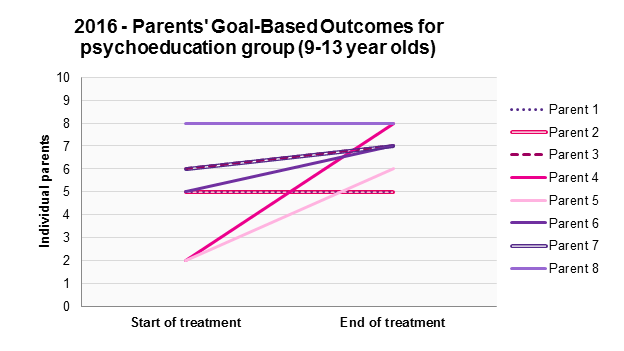 The graph above shows that in 2016 five of the eight parents who attended the parent group reported progress in how much they had achieved a goal they set at the beginning of the treatment. 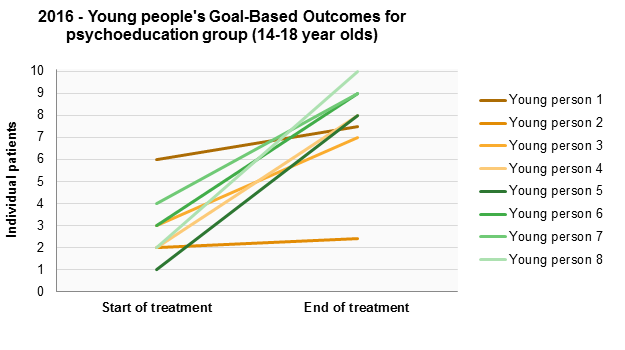 Young people themselves set goals in a group for teenagers with Tourette syndrome. Most young people set personal goals about understanding and living with their condition. Most of the participants felt that they had managed to achieve the goals that they had set by the end of the intervention.

Some young people experience periods where they ‘black out’ or lose awareness of their surroundings for a few moments or sometimes a bit longer. Their body may start shaking and they could fall over and hurt themselves. A doctor may at first think that they could have epilepsy.

Children and families are often confused by the diagnosis of NES, and for this reason we have developed a new information leaflet and also run educational groups as the first step in treatment. The data below was collected from patients and parents at the beginning and end of psychoeducational group treatment, and at 6 week follow-up. This is a one-off, psycho-educational group for young people (aged 11-18 years) and a separate group for parents. It is a single-session of 3-hour duration. The group was run on two occasions, in 2015 and 2016.

A visual analogue scale (VAS) is a continuous scale used to measure subjective characteristics or attitudes. The person completing the scale will mark on the scale where they feel their answer is, in this case between 0 and 100. 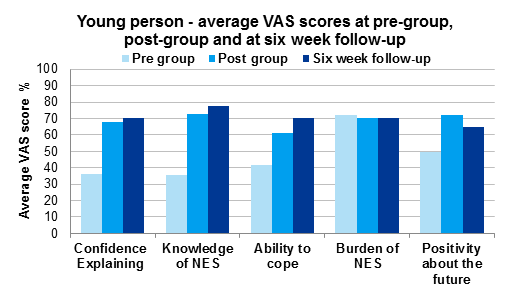 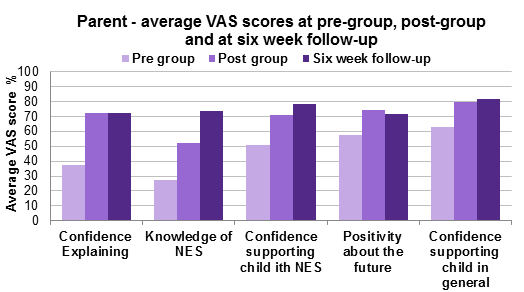 These data were collected to evaluate the impact of a single-session psycho-education group for young people with a diagnosis of non-epileptic seizures, and their families. Young-people and parents completed questionnaires about their knowledge of non-epileptic seizures, their confidence and positivity about the future, and information related to seizures (e.g. frequency, duration and how they were managed.) Questionnaires were completed both immediately before and immediately after the group, as well as six weeks later. The figures show that both young people and parents reported substantially increased levels of knowledge, higher ratings of confidence and greater feelings of positivity after the group, and they continued to feel this way six weeks later. We feel hopeful that the potential benefits of the group intervention will persist and result in fewer symptoms and better coping with the condition.

This measure shows the number of seizures experienced by patients in the six weeks before group treatment and at six week follow-up after completion of group treatment. 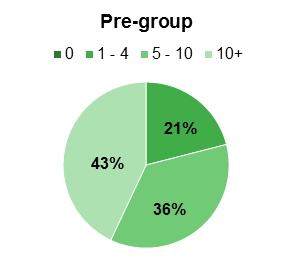 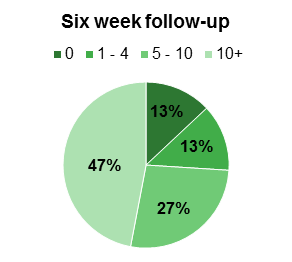 This measure shows the number of trips to A&E for seizures experienced by patients in the six weeks before group treatment and at six week follow-up after completion of group treatment.

Fig 6.1 Total number of A&E visits for seizures in the six weeks before treatment and at six week follow-up 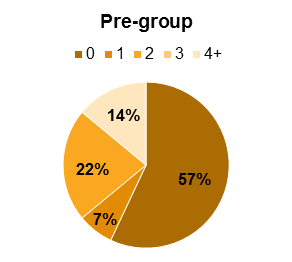 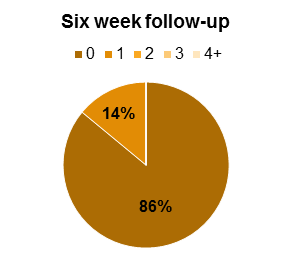 Responses to seizures also changed, with less A&E visits and fewer ambulance call-outs as a result of attending the group, indicating they were seen as less of a medical emergency and handled with greater confidence.

This information was published in August 2017.