About the Neurosurgery Service

As GOSH is one of only four supra-regionally funded craniofacial centres and one of the UK's four specialised Children’s Epilepsy Surgery Service (CESS) centres, the neurosurgery unit is responsible for an increasing volume of craniofacial and, in particular, epilepsy cases.

In November 2019, the unit was commissioned as a highly specialised service for foetal myelomeningocoele repair. Myelomeningocele is a type of spina bifida, a condition that happens before birth where the spinal column and spinal cord are not properly formed. Traditionally this is treated by operating on the baby shortly after birth. Recent studies show that for some babies this can be repaired by operating on the baby whilst still in the womb (fetal surgery). A total of 21 of these operations have been carried out by GOSH with University College London Hospitals NHS Foundation Trust (UCLH).

The following table shows the number of neurosurgical operations at GOSH for the past three years.

The Neurosurgical National Audit Programme (NNAP) was established by the Society of British Neurological Surgeons in 2013 as part of a major quality improvement initiative. The programme aims to support neurosurgical units in the UK and Ireland to improve patient care, outcomes, safety, and experience by providing high quality, robust audit data that is analysed and presented in a consistent and clinically relevant way. Results are available for both adult and paediatric centres. 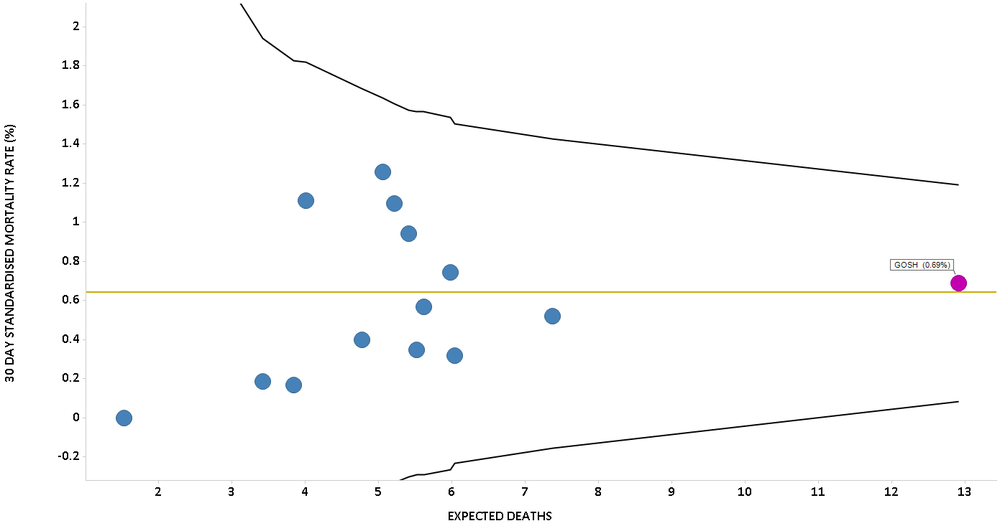 This ‘funnel plot’ diagram displays the mortality ratio for elective procedures in paediatric neurosurgery centres for the three years April 2013 to March 2016. The results are ‘risk-adjusted’, which means that the mortality rate of hospitals where operations are performed on higher risk patients is adjusted to account for these factors. This enables calculation of a predicted mortality rate, against which centres are benchmarked. Expected mortality for each centre will vary from chart to chart depending on the number of procedures performed and the risk profile of the patients treated in that time period. The horizontal yellow line represents the expected ratio. The solid black lines are known as the ‘control limits’. Risk-adjusted rates appearing between the control limits are within the normal range. The results of all centres for this period are within normal range.

The GOSH neurosurgical unit has a zero tolerance approach to adverse events including surgical complications. Every such event is reviewed in a weekly meeting attended by all members of the unit, and actions designed to prevent repetition are discussed. Adverse events are defined here as “Any untoward event related to a child’s admission to the neurosurgical unit that had the potential to increase their stay in hospital and/or produce a temporary or permanent worsening of their health.”

Adverse events are graded as follows:

*procedures undertaken in the department that are not neurosurgical, such as muscle biopsies, have not been included.

Figure 2.2 Adverse events by sub-specialty*† (all years are April to March) 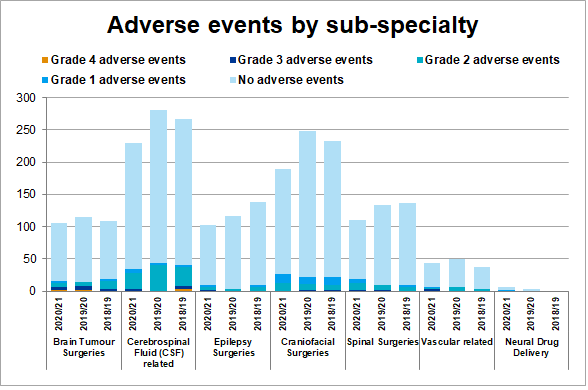 Table 2.2 Adverse events by sub-specialty* (all years are April to March)

A shunt is a device that diverts accumulated cerebrospinal fluid (CSF) around obstructed pathways and returns it to the bloodstream. It is inserted in a neurosurgical procedure so that the upper end is in a ventricle of the brain and the lower end leads either into the heart (ventriculo-atrial) or into the abdomen (ventriculo-peritoneal). Permanent shunts are intended to stay in place for life. However, sometimes additional operations are required as a result of mechanical failure of the shunt, infection of the CSF, shunt blockage, or other reasons.

Shunt infections occur when CSF microscopy or culture demonstrate an organism in the CSF, or when there is an abnormally high number of white blood cells in the CSF, in the presence of fever, shunt malfunction or neurological symptoms. Shunt infection requires removal of the shunt and subsequent antimicrobial treatment. The shunt is then re-inserted once the infection has been treated.

The early shunt re-operation rate is defined as the proportion of patients who require a second shunt operation within 30 days of the first operation for any reason.

Table 4.2 Number and rate of all early shunt re-operations

This information was published in September 2021.