Clinical outcomes are broadly agreed, measurable changes in health or quality of life that result from our care. Constant review of our clinical outcomes establishes standards against which to continuously improve all aspects of our practice.

About the Interventional Radiology Service

Interventional radiology refers to a range of techniques that rely on the use and guidance of radiological images such as x-ray and ultrasound to precisely target therapy for the patient. Interventional radiology is usually performed using needles and narrow tubes called catheters rather than by making large incisions into the body as in traditional surgery. This approach has many benefits including minimising the pain for the patient, the risk of infection, hospital stay and recovery time.

The Interventional Radiology Service does not usually admit patients directly under their care. Instead we see and treat patients on behalf of other teams in the hospital who refer their patients to us for specific procedures. Currently the Interventional Radiology Service performs around 3,500 procedures per year, including central venous access, biopsy, oesophageal dilatation, airway intervention, feeding tube insertion, joint injections, angiography, angioplasty and embolisation, sclerotherapy, percutaneous urinary tract stone removal and thrombolysis.

Central venous access procedures account for about 40 per cent of all Interventional Radiology procedures performed each year. With this procedure, the interventional radiologist aims to safely and effectively insert a thin catheter into a vein so that fluid, nutrition, or medication can enter the patient’s bloodstream and blood tests can be taken without the use of a needle.

Central venous access usually involves making two incisions, one to tunnel the catheter under the skin and the second at the site where the catheter is inserted into the vein. X-ray and ultrasound are used to perform the procedure.

A successful insertion is defined as a visit to the interventional radiology suite where it was possible to make the central venous access insertion, even if it was not at the first attempt.

If the procedure is not successful, the team will try again at another time and potentially try an alternative vein for access. Evidence suggests that the most common cause of the procedure not working the first time is because the child is already critically ill, so trying again is likely to be successful when the child is in better health.

The graph below shows the success rates for Hickman catheter insertions for 2009/10 to 2013/14, which is well above the adult standard: 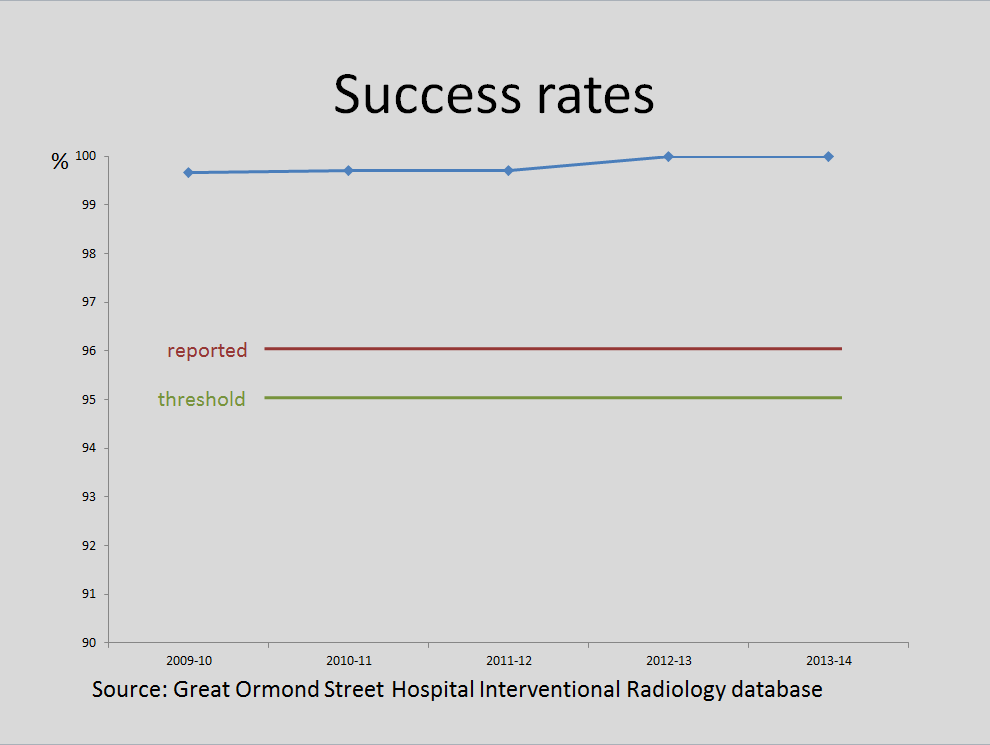 The table below shows the complication rates for our Hickman catheter insertions for 2009/10 to 2013/14, which is again well above the adult standard at zero complications: 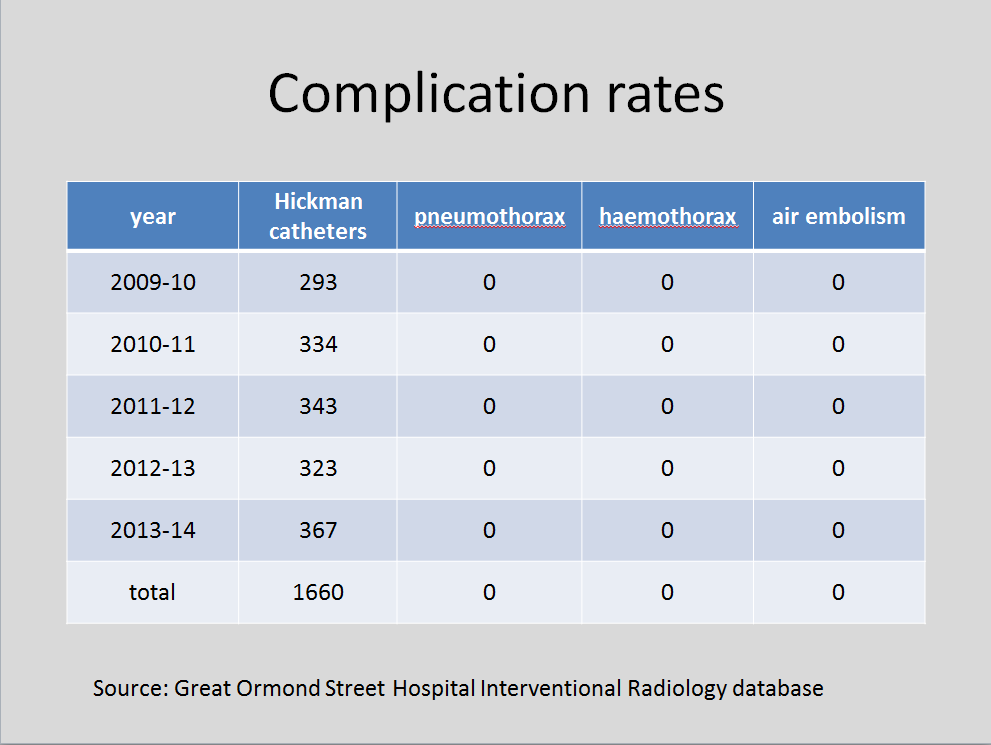 The interventional team perform around 135 renal (kidney) biopsies per year to enable diagnosis of kidney diseases and to assess problems in transplant kidneys. Renal biopsy standards2 for paediatrics enable us to have a benchmark against which to measure our quality.

Ensuring that minimal tissue is taken that will enable a conclusive result by the Pathology department is crucial. If the tissue biopsied is 'inadequate', the biopsy procedure will need to be repeated. Therefore, renal biopsy inadequacy rate is an important measure of effectiveness and safety.

Studies3,4 show an inadequacy rate for renal biopsies in children of 2.5 to 3 per cent.

The table below shows the Interventional Radiology team's inadequacy rates for renal biopsies for 2012/13 to 2013/14:

Renal biopsy carries risk of bleeding, which will be a higher risk for very sick patients. Reported rates1,2,3 of bleeding that requires surgery or blood transfusion range from 0.3 to 1.3 per cent.

Our results range from 1.9 to 0 per cent across the reporting period, with an average of 0.98 per cent. Though we are within the range of reported rates, we continue to monitor our results to seek to continuously improve our outcomes. 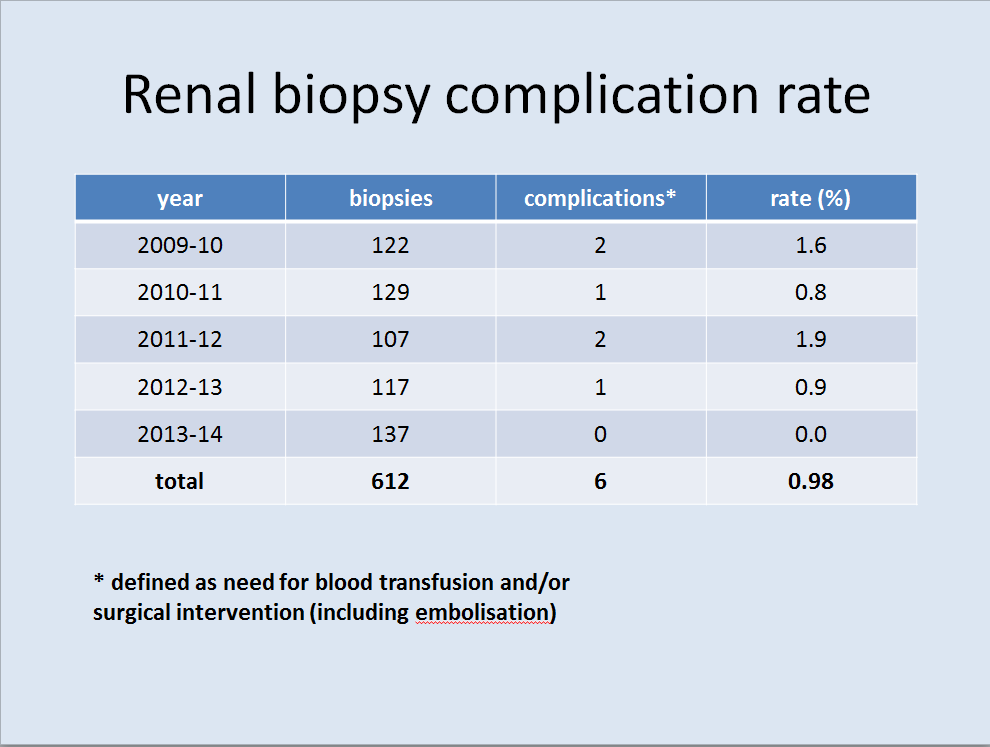 The information on this page will be reviewed and updated in June 2015.