About the cardiothoracic service

The 30-day survival rate for paediatric cardiac surgery is a nationally accepted benchmark that is used to judge outcomes. Predicted patient survival is determined for all centres using a calculation called PRAiS2, which adjusts for procedure, age, weight, diagnosis, and co-occurring conditions (co-morbidities).

The chart below shows that we perform the highest number of surgical episodes in the UK and Ireland. In the three years 2015/16 to 2017/18, there were 1,812 cardiac operations performed in our unit, of which 99.3% of patients survived to 30 days. Based on the confidence limits selected by the National Congenital Heart Audit (NCHDA), our risk-adjusted survival rates for paediatric cardiac surgery are defined as ‘higher than predicted’.

Figure 1: Actual vs Predicted Survival Rates for all 12 centres in the UK and Republic of Ireland undertaking procedures in patients under 16 years of age 2015/16 to 2017/18 using PRAiS2 risk adjustment methodology. 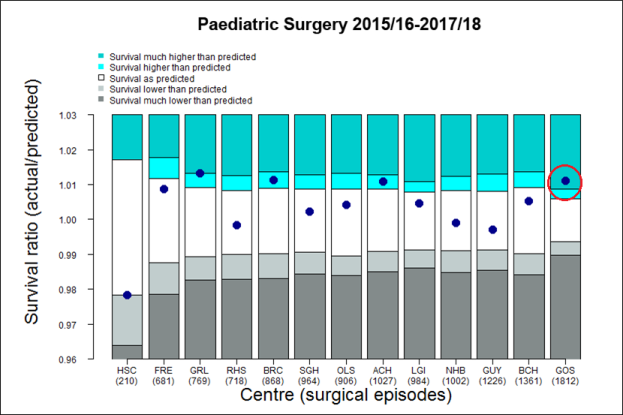 Detail of outcomes for specific operations can be found at National Institute for Cardiovascular Outcomes Research Congenital Heart Disease website.

In 2016, a website called Understanding Children’s Heart Surgery Outcomes was launched to help parents and families to make sense of published survival data about children’s heart surgery in the UK and Ireland.

30-day survival is an important measure, but it is limited. Longer term survival and measures of health and wellbeing are also important to consider. The GOSH cardiothoracic team is committed to developing and using additional measures of outcomes in children with heart disease.

This information was published in December 2019.