Life on a Berlin Heart 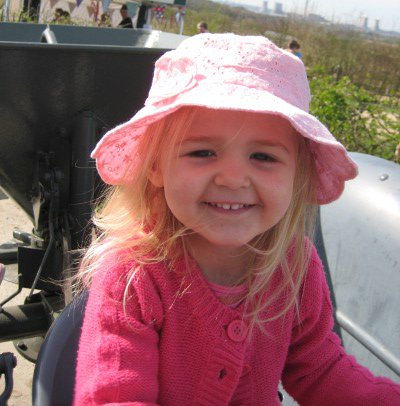 Ellie was 19 months old when her parents, Debbie and Simon, first thought something was wrong. She’d always been a healthy child, but started breathing rapidly, sleeping more than was usual and off her food. The doctor put it down to a common bug but Ellie didn’t improve when they got back home.

After two more trips to their GP, Debbie and Simon decided to take her straight to their local hospital for a chest X-ray and blood tests. Doctors put her on fluids and antibiotics and when she didn’t improve overnight, gave her an ECG and echocardiogram.

Ellie was diagnosed with dilated cardiomyopathy, a condition where the heart muscle is enlarged, weak and cannot pump blood to the lungs and body efficiently. Her heart was irreversibly damaged.

She stayed in hospital while doctors tried to stabilise her condition but, after a further five weeks of regular hospital appointments, suddenly stopped responding to treatment. She was moved to the intensive care unit and put on a ventilator before being transferred to Great Ormond Street Hospital (GOSH). Half an hour after arriving, Debbie and Simon found themselves talking with the transplant team and Ellie was put on the transplant list the same day.

Fitted with a Berlin Heart

For three days, doctors tried to help Ellie by reducing her body temperature to ease the burden on her heart. Unfortunately, her condition was too precarious and she was fitted with a Berlin Heart as a matter of urgency.

While on the Berlin Heart, Ellie had multiple infections and had to have four Berlin Heart chambers changed due to clotting. She also suffered a stroke that caused some changes to her behaviour and limited movement on her left side for two weeks until she recovered.

She was given medication to prevent the blood clots but that made her susceptible to internal bleeding. Debbie and Simon were worried about her falling over and hurting herself; it was often a relief for them to get her back into her cot and out of harm’s way.

After five months on the Berlin Heart, Ellie finally got her chance when a matching heart became available. She spent eight hours in surgery, but instead of her new heart beating straight away, it was inactive for 30 minutes. All of a sudden though, it started beating and Ellie’s condition improved.

After three days in cardiac intensive care unit (CICU), Ellie’s new heart was beating well. She was moved to Ladybird Ward and then into family accommodation.

A few months after the operation, Ellie contracted a virus from the donor heart. She returned to GOSH for treatment and was then transferred her local hospital. She gained strength and her eating improved, but a couple of months later, doctors found the virus had caused damage to the retina of her eyes. Ellie spent Christmas and New Year back at GOSH with her parents.

Ellie left hospital earlier this year but still has regular eye tests and attends clinic frequently. She will also be on medication and anti-rejection drugs for the rest of her life. But, as Debbie explains: "Ellie has spent a quarter of her life in hospital so far, but you wouldn’t know what she has been through to look at her or that she has had a heart transplant.

"The staff at Great Ormond Street felt like a second family as they were part of our lives for so long. They were all brilliant. We all like going back to see them, especially Ellie. They made a terrible part of our lives more bearable. The experience was more positive than I could have imagined a situation like that would be."