I have long QT syndrome by James, 21

"Teenagers love sport, right? I loved sport and I lived sport. More than most. I didn’t just dream about being a professional footballer, or some other sportsman; for me it was a reality.

"One morning a week, I came out of school to train at the tennis club, as well as playing after school. At other times, I’d be playing football. On Saturday and Sunday, it would be either a tennis tournament or a football match.

"I was good at both but intended to become a professional tennis player. I’d been offered trials at football teams but turned them down because I enjoyed tennis so much.

In my county, Hertfordshire, I was one of the top two players. When I was 13, I’d managed to move from 80th in the country to 28th in the space of eight weeks. Then I had my heart attack.

"It was September 2008. I have to piece that day together as I don’t remember it clearly. I remember going to my tennis club at 8am, then on to Hazelwood, in London. I know we had a two-hour session, but I don’t remember anything from that point.

"I was told it was a really tough session and I must have been working really hard to impress. We had to do some fitness training and I was pretty tired. As soon as we started the next drill, I apparently just flopped to the ground.

"Another player’s parent ran onto the court realising I hadn’t just fallen over and that something was up, called 999 and started giving me CPR (cardiopulmonary resuscitation). They reckon my heart stopped for at least 13 minutes. The ambulance arrived and they took me to my local hospital. After that, I got transferred to GOSH.

"I don’t remember waking up. I just remember little bits from my time in hospital. I was pretty confused. I think it took me a little while to understand what had happened and what it meant, how it would affect my life.

"I’d been diagnosed with long QT syndrome, a disorder of the heart’s electrical system, and had to be fitted with a small device called an implantable cardioverter-defibrillator (ICD). It monitors the heart and can restart it if it goes into an arrhythmia or stops completely. It meant that my life would be slower from now on and I could forget about becoming a professional tennis player. 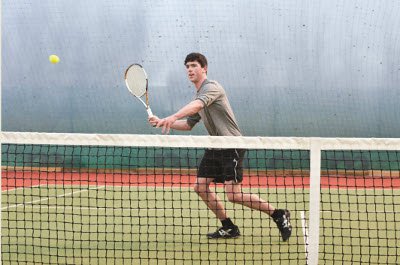 "I went back to school after eight weeks and gradually got back into sports. But it wasn’t until June 2009 that I started playing tennis again.

It was surreal walking onto a tennis court but I didn’t fear going back out there – I really wanted to play. But by this time, I’d realised I couldn’t play as I had before. They said I couldn’t play singles again, that I couldn’t compete. I was really sad, gutted.

"In April 2010, I started to feel really ill. I thought it was just a cold but then I started randomly shivering. A blood test picked up high infection readings and I was referred to my local hospital for lots of tests.

An echocardiogram over my heart showed there was a big infection growing inside my heart around the wires of my ICD. I had endocarditis. I went straight to the high-dependency ward at GOSH.

"I spent five weeks at GOSH. My ICD was removed, I was given a strong course of antibiotics and then I was the first patient to be fitted with this brand new type of ICD – called a subcutaneous defibrillator. It lowers the risk of infection as the leads don’t go into my heart. It’s more like a real defibrillator in that the battery is in a pocket under my arm by my ribs. The wires are sewn into my body under my skin and lay on top of my heart and sense if anything untoward is happening.

"It could have been unsettling to be the first to have it, but I had full confidence in the doctors. My experiences there had been so positive – the nurses were really caring and everyone tried to make being there as comfortable and enjoyable as possible.

"The new defibrillator is pretty amazing. I don’t even notice I have it most of the time. I can spend a whole day without even thinking about it. I’m only really reminded when I go to bed and lie on my left hand side – then I can feel it. And if I’m getting changed during PE at school, I may catch someone staring at it. But it just seems part of me.

"When I play football, I have to wear a chest protector. And at airports, I have to show my little card which says I’ve got a defibrillator, which lets me walk around the side of the security machines.

"Since my new defibrillator was fitted, I’ve been much better. I still visit the hospital for regular check-ups, but I’m now back playing tennis. I won the boys’ doubles and mixed doubles at the county tournament last summer, and in a few weeks, I’m going to Peru on the World Challenge. Over three weeks we spend five days trekking, five days helping the local community, five days sightseeing, and the rest travelling.

"I think it’s important to look for the positives when something like this happens and make the most of life. It isn’t as bleak as you might first think.”