Growing up with microtia by Bethan, 18

When Bethan was 10, she underwent reconstructive surgery at Great Ormond Street Hospital (GOSH) to change the appearance of her ear. Here she shares her experience.

“I was born with microtia in my right ear, which basically means I was born with a peanut of tissue rather than an ear. All my life, I have been completely deaf on my right side and have relied on hearing from my left ear only. I can’t imagine hearing properly from my right side so I don’t know what it feels like to everyone else, or what they can hear.

"It affects me at college because I miss a lot of information. Similarly when I'm crossing the road I have to stand there longer than other people to make sure I can hear it's clear, as it takes me longer to work out what’s going on around me.

“Sometimes I do struggle with stuff and need my family to help me, but it’s got better since I have been older, and the operation has really helped me. I'm undergoing maxillofacial (on the upper jawbone and face) and dental treatment to have a brace. In about 18 months we can decide whether to go through with jaw surgery or chin realignment, which are also designed to help the asymmetry on my face from hemifacial microsomia.”

One of the treatments available for microtia is ear reconstruction, using a rib graft. This involves making a new ear from the cartilage in your ribcage.

“I don’t have many signs or symptoms of the condition any more. I had the ear reconstructed when I was 10, but it’s not a functioning ear, there are no entrances to it, it’s just blocked off. I don’t have to take any medication though, and never really have done.

“When I came to GOSH for the operation eight years ago, I stayed in for a week on Peter Pan Ward. I also came in to stay overnight when I was 13 to have a Coleman fat transfer to reduce the appearance of asymmetry in my face.” 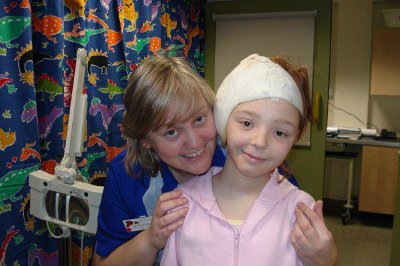 Bethan after her surgery at GOSH

“I really like the wards at the hospital – they are decorated nicely and have pictures all over the walls. At the moment I only visit the hospital as an outpatient, but I have been coming since I was three months old. I am currently trialling a new bone-anchored hearing aid which produces sound that comes through the skull bone on the right side. It’s made so much difference to my life.

“I look forward to coming in for appointments; especially visiting the staff.  One of my favourite things about the hospital is how friendly the staff are. They know you and know how to talk to you – they come down to your level and want to know what you’ve been up to. They really care.

“I don’t really have a least favourite part to coming to hospital, I love it! The atmosphere at GOSH is so different; they had a play specialist who used to come to our rooms and do arts and craft. I also had visitors while I was an inpatient, including my sister who came when I had the reconstruction.”

“I didn’t get to know other patients when I was at the hospital, but on Facebook there are support groups, and groups of patients who have also been admitted to GOSH in the past, so we talk on there. I have also made contact with some other young people with my condition online as well.

“On forums and the internet people say that you have to have the operation, but you don’t, it’s your choice. I had it because I was bullied by lots of people at school. It made me want to get it reconstructed, so I did, but people continued to bully me. It was still bad because they all knew I had had the operation and how it looked. Unfortunately, it carried on until I left school, but now in college, its fine, no one really knows about it unless I tell them.

“The main piece of advice I would give to other children and young people is don’t worry about what other people think, they’re always going to have judgements, but as long as you’re happy it’s alright. If you don’t want to have the surgery then you don’t have to – just be happy with who you are. People with microtia have the same opportunities available to them as anybody else.

“In 2012 I ran the RBC Race for the Kids with my dad and I am now a fundraiser for Great Ormond Street Hospital Children's Charity as a way of thanking them for everything they have done for me over the years.”