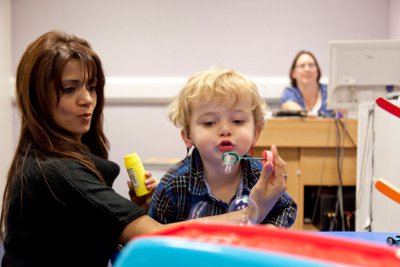 The Audiological department at Great Ormond Street Hospital offer a range of tests for children attending the hospital.

The distraction test is ideally used for babies who are developmentally six to eight months old (although it can be used from six months to 24 months of age by experienced testers), and assesses the ability of the baby to hear a sound then turn to locate it.

The sounds are produced to the right or left behind the baby out of their field of view. Various sound stimuli are used such as rattles, voice, drum and warble tones. The loudness of the sounds produced are varied to try and establish the minimum level that the baby is able to hear.

This test is suitable for infants from six months to two years old. This is a powerful technique that can be used to determine frequency and ear specific hearing thresholds.

The child is seated between two visual reinforcing reward boxes with a loud speaker on top of each one. To condition the child a sound is played from one of the boxes on the left or right, as the child turns to the sound they are presented with a visual reward in the form of an illuminated puppet in the box.

After several presentations the child has been trained to turn to one of the boxes when just a sound is played. A series of tones or warbles are then played at reducing intensity to obtain a minimal response level. After the child turns to a sound they are visually rewarded with one of the puppets.

In order to obtain ear specific hearing thresholds the child may wear headphones or have small insert phones placed in the ear canals to generate the stimulating sounds.

Play audiometry is suitable for pre-school children of 20 months to five years old (developmentally). The child must be able to understand simple instructions and commands.

A game is played in which the child must perform an action when a sound is heard. This could take the form of putting toy people in a boat or building a tower from blocks. The complexity of the task can be modified to be age appropriate.

The child wears headphones or probes inserted into the ear canals (inserts) during the test. Sounds at various frequencies are presented to the child and gradually reduced in loudness. Each time they hear the sound they must perform the action until they can no longer hear the stimulus.

The point at which they stop performing the task is taken to be the hearing threshold at the particular frequency being tested. The process is repeated for a range of frequencies in each ear.

Children of school age upwards are generally able to manage this test. Tones of varying frequency and intensity are played through headphones or insert phones. The child must press a hand held button for as long as they can hear a sound.

Sound is presented into the ear canal via a probe. The sound wave passes through the ear drum and middle ear then into the cochlear. This stimulates the hair cells in the cochlear causing the outer hair cells to twitch in response creating an echo.

The echo passes back through the middle ear and ear drum where it is detected by a microphone situated in the probe. This signal is stored on a computer and plotted on a graph.
The results from this test give an indication of any damage that may be present in the sound detecting and amplifying hair cells. The outer hair cells are able to increase the sensitivity of the cochlear when functioning normally by up to a factor of 1000 times. An absence of or damage to these cells will significantly reduce hearing thresholds.

Computer analysis of the echo from these cells can indicate the level of function present in the cochlear under test.

Clicks or tones of varying intensities are presented via probes placed in the ear canal. Electrodes are attached to the mastoids behind each ear and one to the upper forehead. The sound in the ear canal passes to the cochlear which converts the sound waves into a nerve action potential which passes along the auditory nerve.

The signal then travels to the brainstem and on to the cortex where it is processed by the brain. This wave of activity is collected by the electrodes, amplified, and passed to a machine for processing.

If as is the case with glue ear fluid builds up behind the ear drum the membrane will become less elastic thus reducing the sensitivity of sound detection. This is known as a conductive hearing loss.

When a loud sound is presented to the ear, a protective mechanism is triggered that tightens the small bones (ossicles) that connect the ear drum to the cochlear and reduce the sensitivity of hearing.

This procedure tests the pathway of the sound from the ear canal, through the middle ear, into the cochlear, up to the brainstem then back down to the muscle that tightens the ossicles.

Great Ormond Street Hospital has four soundproof test rooms containing all the equipment required to carry out the range of audiological tests described above.