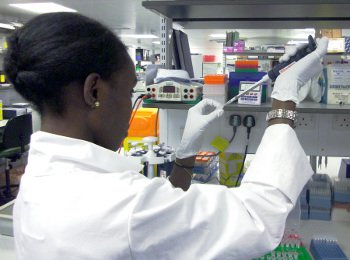 Since 2010, the NIHR BRC funded Centre for Translational Genomics (GOSgene) has facilitated the discovery of new genes in rare genetic diseases and therefore the underlying genetic cause of various disorders.  The initiative helps improve diagnostic testing, supports genetic counselling, and will guide further functional analysis aimed at understanding the pathogenesis of disease and improvements in patients’ management of disease or developing novel therapies.

The GOSgene team has performed whole-exome
sequencing on over 320 samples covering a spectrum of 46 clinical phenotypes since April 2012. This work has resulted in the identification of 32 disease genes, 19 of which are novel. The current gene identification success rate is 59%, which is very high for a gene discovery programme of this nature.

BRC investment into GOSgene has provided the support to build a team of researchers who are expertly skilled in the utility of next generation sequencing and will be ready to become the future leaders in translational genomic science. They will also be poised to utilise the large data sets being generated
by national genomics initiatives such as Genomics England.

Collaborations with industry are increasing the value of our investment into GOSgene. GOSgene has formed collaborative partnerships with industrial partners including Illumina and Complete Genomics through links with the North East Thames Regional Genetics Service based at GOSH. GOSgene has also established a strong collaborative link with one of the leading software companies in the field of genomic data analysis, Qiagen Ingenuity Systems. The company provides intuitive web-based applications for quickly analysing and accurately interpreting the biological meaning in our genomics data. The collaboration with GOSgene has led to further software development which has enhanced data quality and interpretation times. This in turn has allowed GOSgene to adopt more projects and support more researchers across GOSH and UCL.

GOSgene is well positioned to combine the genomics and proteomics expertise from across UCL. The BRC has committed over £1 million in a new high definition, in-depth phenotyping at GOSH (HIGH-5) programme which will deliver an all-inclusive OMICS approach to inform diagnostic and treatment options of rare diseases. Genomics, proteomics or metabolomics approaches in partnership with the UCL Translational Biomarker Discover Unit – GOSomics will help to achieve a better understanding of the basis of genetic variation in human disease (and health) by characterising molecular endophenotypes. The aim is to identify molecular endophenotypes, modifiers of disease and therapeutic targets to personalise patient care.