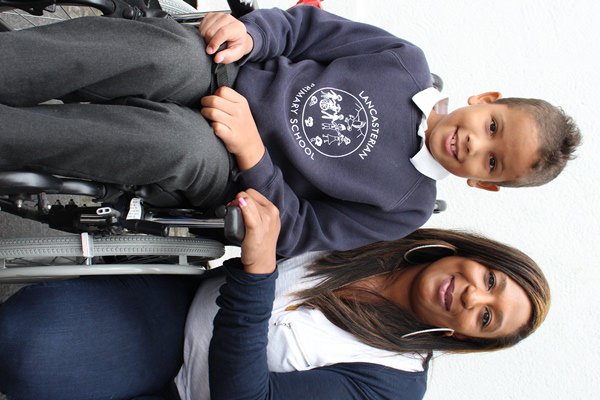 Eight-year-old Jude was born with spina bifida, a birth defect where the spinal cord and surrounding vertebrae haven’t formed properly, causing a gap in the spine. His mum, Nadine, tells us about her experience.  “Ten weeks into my pregnancy I found out I was having twins. As far as I was aware everything was OK. I was taking folic acid and pregnancy vitamins, and I’d had two other children. Then at my five-month scan I was told the first twin was fine, but that Jude could have spina bifida.

“Once Jude was born I only got to see him for a brief second. He was taken to Great Ormond Street Hospital (GOSH) the next day and I didn’t see him for three days. I felt relieved because everyone knows what GOSH does. We felt we didn’t need to worry about anything. Dominic Thompson, the Neurosurgeon, called me and told me that they were going to close the hole in his back, that they were going to take very good care of him and not to worry. When you meet the surgeons and see what they can do it’s incredible. In my eyes he’s had to operate on a baby. I have that child home now who’s fine, and that’s all down to him. All we could say was thank you.

“What was difficult was when I had the twins in the buggy and people would stare. Jude couldn’t lie on his back because of the operation, so he had to lie on his side. At first I put a cover over him but then I thought: ‘No! Why am I going to make my baby hot just to stop people staring?’ So I decided if they want to look they can look, and if they ask I will tell them.”

“Jude is quite lucky because of where the hole was. It was the size of an old five pence, right at the lower part of his back. It affects his bowels, bladder and from his ankles downwards, so he has club feet. He’s had several operations since the closure of the hole in his spine. When he was just under two-and-a-half he had the bones pointing downwards on the soles of his feet lifted. His feet used to really turn in and they caused a lot of pain. After the operation he’s learnt to walk straight, and now he walks really well.

“In 2011 he had bone shaved off his shins because his bones were growing twisted. In March 2013 he had antegrade colonic enema (ACE) surgery, and bladder augmentation, mitrofanoff and bladder neck repair done. This last operation for me was definitely the worst. I’ve never waited so long. That was very, very scary because normally they put him to sleep on my lap and in a couple of hours he’s out and up on the ward and everything is fine. But having the mitrofanoff and bladder reconstruction done took a very long time. Normally when he has operations he still looks like Jude, but it was very stressful to see him lying there helpless and in so much pain and I couldn’t do anything. I couldn’t hold him for about a week. He’s doing OK now, but that was a very big low.” 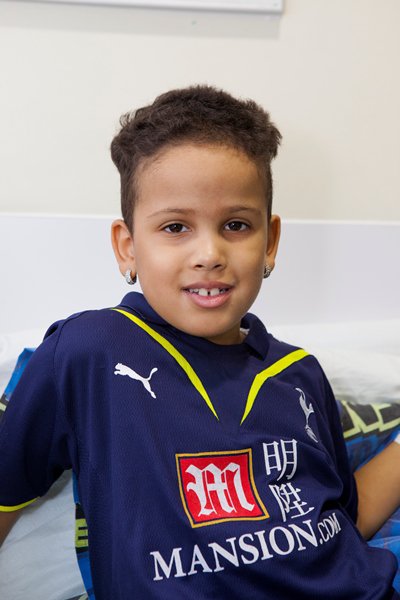 “When people think of children with spina bifida, they think of a wheelchair, but Jude only has a wheelchair for long distances. At school he has a walker and crutches at home. He’s quite mobile, and he’s getting more confident. We’ve always said to him: ‘Spina bifida is what you have, it’s not who you are,’ so in his mind he can do what he wants, and I think that’s very healthy.

“There are some teething problems at the moment. When Jude was a lot younger being in nappies didn’t bother him because he didn’t know anything else, but in his head he can’t wait to come out of nappies. We’re just waiting to see.

“Seeing other disabled people makes Jude feel a lot better. He likes to see other children the same as him who don’t go to a special-needs school. He goes to mainstream school, but there’s no one around like him. At home he’s confident, but at school I think it’s hard because he can’t run as fast and he gets left behind at times. This year he’s been doing quite well and he was playing football with his friends. I think he’s taken this whole thing as a bit of a confidence boost.

“I think this year has taken a lot out of the whole family because I haven’t really been around because of the operations. My eldest two daughters understand that this was something that I had to do, but Jude’s twin, Sydnee, has found it hard, and I have to include her in everything. I’ve told them we have to stick together in order for things to work, but that’s the same for any family. I think that I’m still trying to make up for the three days Jude didn’t have me.

“We talk openly about everything, depending on how Jude feels, because he’s very private. I think Jude doesn’t want any more surgery, but I’ve said to him, if the hospital thinks that’s the best thing, we should listen to them. He always discusses it with his twin sister. They’re very close. Whatever’s on his mind he discusses it with her first and then comes to me.

“For the future, I can definitely see Jude out of nappies. There’s also a very big hope for me that as he gets older he manages to walk with just one crutch, because he doesn’t like the wheelchair. I want him to be as independent as possible.

“To other parents whose child has spina bifida, don’t feel doom and gloom. You have to give your child confidence and love and treat them normally. Don’t treat them like they can’t do things. Show them that they can do anything that they try to do. Let them try. It’s very important to give confidence to your children, and especially disabled children.

“To parents coming to GOSH for the first time I’d say don’t be frightened, because Great Ormond Street Hospital is absolutely amazing. It is quite daunting, but the staff know what they’re doing, so you’re in safe hands. When Jude had his operations I never felt I had to question why they were doing it. I trusted that they thought it was for the best. Obviously I had questions, but if they thought an operation would be best for him because it would enable him to do more, that was fine. So just listen to the doctors, because in my opinion they really know what they’re doing. I always say: ‘Don’t worry! You’re in Great Ormond Street Hospital. Go and have a coffee!’ It’s the best place to be.”