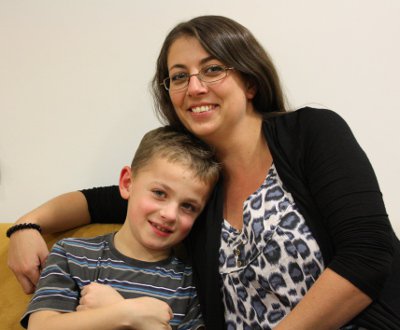 When Emma’s son Sam was three he was diagnosed with Duchenne muscular dystrophy (DMD), a life-limiting condition which causes the breakdown and loss of muscle cells. Here, Emma shares her experience of having a child with DMD, and what it’s like to take part in a clinical trial at Great Ormond Street Hospital (GOSH).
"When Sam was about two he started falling over quite a bit. His speech was slow and he had huge calf muscles. I’m a children’s nurse so asked my colleagues for their opinion. Something didn’t sit right with them and they wanted to see him.

"Sam had a few blood tests. There are certain levels they can use to diagnose DMD and these were elevated quite a lot. A few months later, when he was three, Sam also had a muscle biopsy and this confirmed that he had DMD. I felt absolutely devastated. It was really weird being a children’s nurse and then finding myself on the completely opposite side. It was just awful."

"The neuromuscular services in my local hospital often send their patients to GOSH, and that’s how we ended up here.

"Both as a nurse and as a person who’s heard of GOSH I was really pleased to be referred. The first time we came was very daunting because it’s such a huge, famous hospital, but as soon as we got through the doors it was fine."

"We’ve been coming to GOSH for three-and-a-half years now. It started with a visit every six months. Sam was put on long-term steroids, which is thought to help children with DMD. We hoped that it would help maintain his mobility for a bit longer and he did seem to get slightly stronger. That was about it really, apart from multivitamins."

"During one of our appointments at GOSH, Sam’s consultant mentioned the possibility of clinical trials in the future. We were very interested so they jotted our name down. One day, a few months later, we got a phone call out of the blue to say that they wanted to see us.

"I always knew from diagnosis that I needed to know I had done everything I could for Sam, but it was a huge decision to take part in a clinical trial. At first I thought ‘oh my goodness, this is really scary,’ but then I started to think about it more sensibly and I realised that they only get to this stage of testing a drug by focusing 100 per cent on safety.

"When we came to the Somers Clinical Research Facility (CRF) at GOSH for the first visit, any issues I had were solved and they talked us through everything. It was very reassuring to be in touch with the main people in the country, and probably the world, who know exactly what’s going on with DMD and the current treatments.

"We were given the opportunity to withdraw at any point, but because everything was explained so well it’s been fine. I was also able to get in touch with another family who’ve been on a clinical trial at GOSH and they’ve had positive experiences."

"We started back in November 2010 and Sam had to go through some screening visits to see if he was suitable for the trial. Before he was given the drug there were lots of investigations to get the baseline for the future of the trial.

"Sam also had a muscle biopsy at the start which was one of the scariest things for me, even though he’d already had one. It’s under general anaesthetic, which is one of the main concerns for any parent, and knowing it was just for the trial was quite a big decision.

"We decided that we would go ahead with it and again we were at the best hospital in the country so we were happy and he was absolutely fine."

"Since then we’ve been coming to the CRF every week on a Tuesday. Sam has an injection every week and blood tests every other week which he’s been very brave for. They monitor his heart quite closely and he’s been having bone and heart scans.

"Sam also has a school teacher who comes for an hour on a Tuesday which he absolutely loves. He’s got really into school back home so he enjoys showing the teacher what he’s learnt."

Next steps for Sam

"This is the last week of Sam’s trial. He’s going to have a month or two break and then after Christmas we’re going to come back and start a two-year extension study.

"This hopefully involves coming back to GOSH once a month and then having research nurses coming out to the house to administer the drug at home. It’ll be nice to have a few weeks off but I’m really keen to get back and get onto the extension study. This year’s gone really fast, but it’s all been really positive."

"Taking part in research has been a very good experience. We’ve been made to feel so comfortable with everything that’s happening. We’ve been kept in the loop completely and if there have been any slight problems, such as a dodgy blood result, we’ve been told. It’s nice to know things aren’t being discussed behind our backs."

"We don’t know whether we’re on a placebo yet so we’re not supposed to speculate too much about whether we think the trial is working. I know none of the professionals can say but from a parent’s perspective, I think we have seen an improvement with Sam’s stamina and his strength, so we’re just hoping that it’s the drug that’s working."

"Alongside his daily medication, we also have to do physio with Sam twice a day, focusing mainly on his leg muscles. He has this done at school and we do it at home too. He also wears night splints in bed.

"At times Sam gets really tired and struggles a bit, but probably less so at the moment. In the past we’ve had to be careful about what activities we’re going to be doing and think about how tired he’s going to be, maybe having a quieter day the following day.

"The CRF has also put me in touch with a counsellor and she’s really good. She’s been up a few times to talk to me about the trial and how we’re all feeling.

"It has been a bit challenging at times having to juggle our lives with coming up here every week, but we’ve all pulled together and it’s really worked for us."

"Sam does occasionally get frustrated when he can’t keep up with his friends. He can’t run as fast as them and he can’t join in some of the games. Sometimes he does seem a bit cross and quite sad, but his friends are very accommodating and over the years they’ve really learnt what Sam can and can’t do. I think his confidence has grown because of this. He knows his limitations now too so that helps.

"At the start you feel like you’re completely on your own but I’ve found that there’s a huge support network out there for parents of children with DMD. Speaking to other families has really helped me, and health professionals can point you in the right direction.

"Being in touch with the main people in the country and probably the world for DMD has been such a highlight for us. Knowing they’re just a phone call away and that he’s getting the best care is wonderful.

"It seems like there are lots of promising trials on the horizon for DMD, not just the one Sam’s been on, so it’s not such a bleak outlook. It’s important to cling on and hope that something does start to work and will be available to everyone with DMD.

"At six years old, Sam’s at a good age for DMD. We haven’t seen too much of a decline in his condition which is good. Sam recently learnt to ride his bike which was a huge milestone for us. At the moment we’re really happy."