Overview of orthopaedics and physiotherapy

The orthopaedic team at Great Ormond Street Hospital (GOSH) aims to provide a comprehensive assessment of complaints of the musculoskeletal system and then arranges the appropriate management for the patient. The orthopaedic team includes specialist physiotherapists.

Physiotherapy is available in many different clinical areas, providing a service to both inpatients and outpatients. It supports a number of clinical specialities.

One part of the service is provision of the Ponseti technique for treating children with clubfoot. This is overseen by the orthopaedic speciality and lead by a specialist physiotherapist.

The following section details the clinical results for this part of the service.

The Ponseti technique is used at GOSH to correct clubfoot (Congenital Talipes Equinvarus - CTEV) deformity in children enabling the child’s foot to bear weight in a normal way and develop normally over time.

The technique has become the preferred treatment option for CTEV because it is more effective than alternative surgical methods and has been associated with significantly better long-term results for the majority of patients.

The Ponseti treatment involves a manipulation and casting technique which is performed on a weekly basis until the foot has corrected fully. Most children require a minor operation in the outpatient clinic under local anaesthetic to release the Achilles tendon and allow full correction to be achieved. This is called an Achilles tendon release. Children are then fitted with splints (called ‘boots and bars’) to keep the corrected foot in place.

The Ponseti Service at GOSH was established in 2005 and over the last 13 years has accepted on average 16 new CTEV patients per year.

The service treats children with both idiopathic and non-idiopathic clubfoot and often patients are referred from other hospitals where treatment has not succeeded.

Therefore treatment tends to start at an older age and initial treatment has begun as late as seven years old.

More than half of the patients treated by the service have significant other medical conditions which may influence the management of the CTEV. The chart below shows the total of idiopathic clubfoot (n = 88) and non-idiopathic clubfoot (n = 121) patients seen in the service since 2005. Seven patients were over the age of two years before treatment started, and 65 patients were referred to GOSH following previous treatment/relapse from another trust. 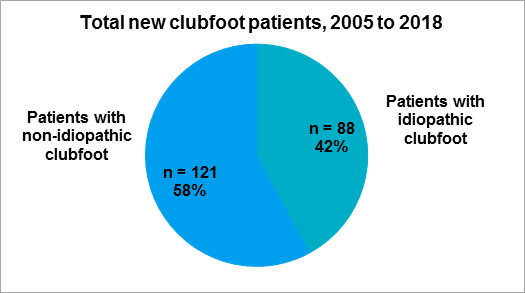 In order to assess the results of the technique, the Ponseti Service records the success of treatment for each patient. Success is defined as a patient in whom the clubfoot has been corrected without the need for a major surgical procedure.

209 CTEV patients have been treated by the GOSH Ponseti Service since 2005.The average success rate for initial correction is 98 per cent.

Following initial correction, 192 patients have continued to be treated successfully using the Ponseti technique and have not required corrective clubfoot surgical treatment. This represents a 92 per cent overall success rate for the Ponseti Service at GOSH and is comparable with the global gold standard for the technique.

The Ponseti Service also records when there has been a relapse of the foot after initial treatment. Relapse is defined as recurrent deformity following an initial successful correction. This may happen over time and as the foot (and the child) grow.

While patients may have relapses, further manipulation and casting often results in successful correction again. Treatment success is undoubtedly related to the family’s compliance in the child's wearing of the ‘boots and bars’, but also normal muscle power around the ankle affects success rates. Therefore, a small number of patients will require repeated casting and/or surgical intervention with a tibialis anterior tendon transfer (TATT) to maintain a corrected foot.

Of the 209 patients treated by the GOSH Ponseti Service, 47 have had at least one relapse. Most have responded well to further Ponseti treatment, and 25 required further casting and a TATT to correct the recurrent CTEV. All these patients had undergone successful Ponseti treatment for a few years before the foot relapsed and surgery was considered.

The majority of patients require an Achilles tendon release as part of the initial Ponseti treatment: at GOSH the figure is lower for idiopathic clubfeet (63 per cent) and higher for patients with non-idiopathic clubfoot (83 per cent).

The table below provides data on the patients that were treated by the Ponseti Service by year of their first appointment in the service.

Table 1.1 Number of patients treated by the Ponseti Service by year of first appointment, 2005 to 2018

The chart below shows the success of initial Ponseti treatments, by year. 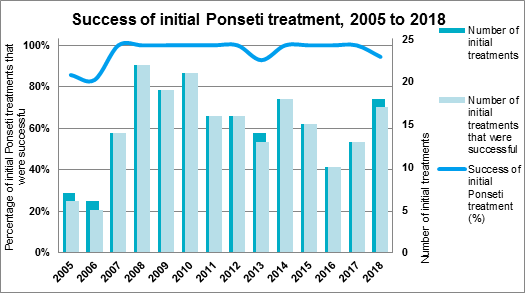 This information was published in April 2019.